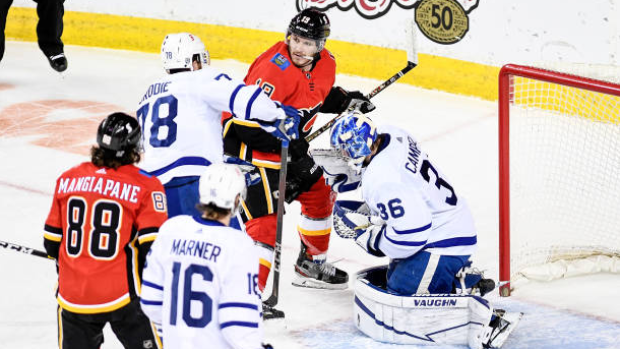 The Toronto Maple Leafs' victory over the Calgary Flames on Sunday proved to be a costly one.

Head coach Sheldon Keefe revealed on Tuesday that goaltender Jack Campbell is expected to be out for "weeks" after incurring a leg injury during the 3-2 win.

Sheldon Keefe said Jack Campbell has a leg injury that will keep him out for weeks. Joe Woll is headed west to eventually join #Leafs on taxi squad. Hutchinson will back up

In his two starts this season, Campbell is 2-0 with a goals against average of 2.00 and a .923 save percentage.

Michael Hutchinson,  who made 20 appearances for the team over two seasons from 2018 to 2020, will now serve as Frederik Andersen's backup in Campbell's absence.

Goaltender Joseph Woll is expected to be summoned to the Leafs' taxi squad.

The Leafs and Flames face off again in Calgary later on Monday night.