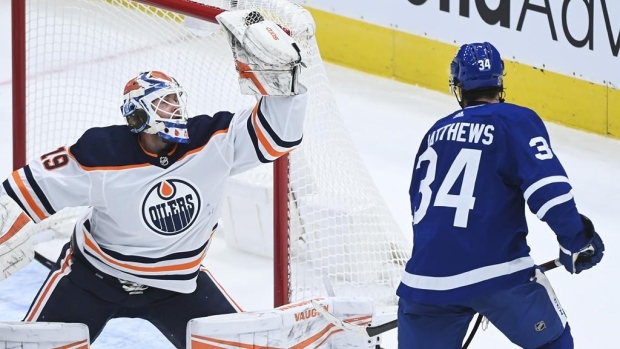 TORONTO — The Maple Leafs are looking for balance.

And they're hoping their best player will be part of the solution.

In the wake of Wednesday's 3-1 loss to Edmonton where Toronto severely limited Oilers stars Connor McDavid and Leon Draisaitl at 5 on 5, but also failed to offer much of anything going the other way in a plodding, mostly uneventful affair, the Leafs are aiming for more symmetry.

"Just because we're defending well doesn't mean we can't be attacking and playing well in the offensive zone," said winger Zach Hyman. "You can have both. You don't have to have one without the other."

What's unclear is whether Toronto will have star centre Auston Matthews to help lead the charge in Friday's rematch at Scotiabank Arena. The 23-year-old took the ice before Thursday's practice, had a conversation with assistant coach Manny Malhotra and another chat with a trainer before departing ahead of the formal session.

Toronto is already minus two options up front with veteran forward Joe Thornton, who suffered an upper-body injury against the Oilers, expected to miss time, and winger Nick Robertson (knee) unavailable. Keefe put his lines in a blender out of necessity Thursday, bumping Hyman into the top-6 alongside John Tavares and William Nylander, while Jimmy Vesey skated in Thornton's spot with taxi squad member Adam Brooks — a practice placeholder for Matthews — and Mitch Marner.

The Leafs gave up a fluke own goal, a power-play effort from Draisaitl that came off a fortunate bounce and an empty-netter in Wednesday's matchup that, despite a boatload of talent under one roof, never saw the expected fireworks materialize.

"We negated the biggest offensive threats on their team," Keefe said. "It gave us a chance to win, but certainly we have to deliver on the other side of the puck as well."

Toronto goalie Frederik Andersen, who seems to be finding his groove after some early hiccups, had a front-row seat to the on-ice chess match — the first of nine meetings between the North Division rivals in this abbreviated season.

"I saw two teams that definitely locked it down pretty good defensively," he said. "Great teams do both things well. I think we have that ability. It's something we want to set the standard to do every night.

"Even though you play well, you might not get the results you want."

Oilers head coach Dave Tippett made the point after his team's practice Thursday that both rosters have a say in the other's ability or inability to score at even strength.

"It's almost funny to me how everybody talked all (off-season) about Toronto and Edmonton have to defend better," he said of the offensive juggernauts' past troubles keeping the puck out of their respective nets. "And then Toronto and Edmonton actually defend well, and now they think it's a bad hockey game.

"It just baffles me sometimes."

Leafs blue-liner Jake Muzzin said finding a balance between trying to contain elite skill and pushing forward can be tricky.

"Maybe (on Wednesday) we focused a little too much on defending."

As for Toronto's new line combinations, Hyman said he's looking forward to suiting up with Tavares and Marner after playing with both separately at different points in their careers.

"Excited to get at it," Hyman said. "This year more than any year, your depth is going to be tested. Fortunately for us, we have a ton of guys who can move up and down the lineup."

Keefe said despite the criticism of Wednesday's performance — it was far from easy on the eye — the Oilers deserved credit for a committed defensive effort.

Now the Leafs need to respond.

"They clearly came in with a plan," Keefe said. "It was two teams that were trying to respect each other's strengths and nullify them. Ultimately, as much as we didn't like our game ... we gave ourselves a chance.

"There's lot of encouraging signs there. We've just got to put it all together. We'll stay at it."

This report by The Canadian Press was first published Jan. 21, 2021.