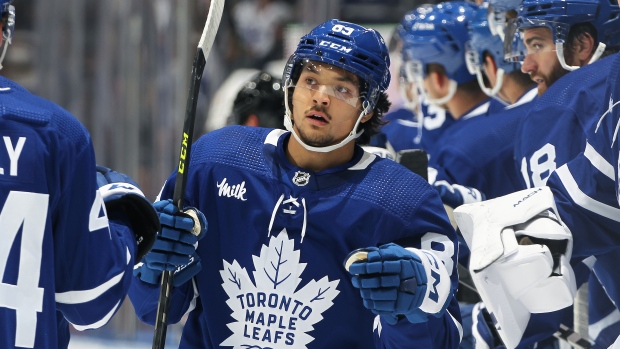 With goalie Matt Murray on the long-term injured reserve with an adductor injury, the Toronto Maple Leafs were able to recall forwards Wayne Simmonds and Nick Robertson as well as defenceman Victor Mete from the American's Hockey League's Toronto Marlies on Sunday.

Murray will miss at least the next month with the injury suffered during practice on Saturday, meaning his $4.68 million salary won't count towards the Maple Leafs' cap until he is able to return to action.

The 34-year-old Simmonds scored five goals and 11 assists over 72 games with the Maple Leafs in 2021-22, his second campaign in Toronto.

Robertson, 21, spent most of last season in the minors, but showed potential this preseason before being sent down due to cap restraints.

Nick Robertson among the first players on the ice ahead of Leafs practice pic.twitter.com/4xJ26PzOpM

Mete, 24, was signed this summer by the Leafs after recording seven assists over 37 games with the Ottawa Senators last season.

Forward William Nylander missed practice on Sunday due to a maintenance day.