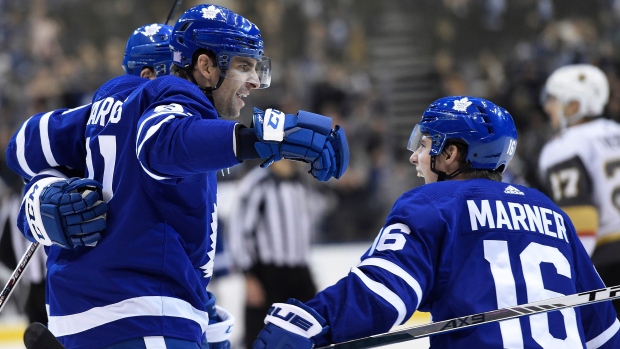 TORONTO – The first thing Maple Leafs’ head coach Mike Babcock would say about his team’s current season-long three-game win streak is that goaltender Frederik Andersen has been terrific. But also that Toronto’s run of success goes deeper than any individual contribution.

“I just like the fact that our guys seem to be enjoying each other more and getting to know each other better,” said Babcock after the Leafs’ morning skate on Saturday, ahead of facing the Philadelphia Flyers. “We have more energy as a group, seem to be playing better. We’ve been good in all three games at time. So staying the course and not getting in your own way would be the big key.”

If the Leafs have played well at points in every November game, Andersen has been great in them all, starting with how he put Toronto on his back last Saturday to come from behind and beat Philadelphia in a shootout. The Leafs' starter has already played more minutes than any goalie in the league this month (187:31), and has the eighth-best save percentage (.951 per cent) and ninth-best goals-against average (1.60) in that stretch.

After backstopping Toronto to their most recent win, a 2-1 overtime decision against Vegas on Thursday, Andersen identified the team’s recent Halloween party as an important bonding experience. It’s perhaps not a coincidence then that since building stronger relationships off the ice, the Leafs have yet to lose on it.

“I think [that bonding] was huge, especially with as many new faces as we've had this year,” said John Tavares. “Get everyone together, get to know each other, have some good moments, some things to banter about in the locker room afterwards and get on each other's case about. Those things are crucial in building the chemistry in here, so you want to take advantage of those key things."

That’s not to say that simply hanging out has been the remedy to Toronto’s early-season struggles, which has included falling out of a playoff spot for a spell and losing five tightly-contested one-goal games that were not unlike the tilts they’ve most recently won over Philadelphia and Vegas.

But in a year where momentum has been at a premium, finding some stable ground to grow from is a welcome change.

“When you're able to get results and win some of those tight hockey games, and find ways to win [by getting] momentum back or [when] certain things aren't going as well [is big],” said Tavares. “And then when you do good things, you build that identity and confidence and figure out how we're going to win hockey games and how we're going to continue to get better. Everyone kind of feels more comfortable in their role and contributing to the team now.”

That has been a process for newcomers like Tyson Barrie, Alex Kerfoot and Ilya Mikheyev, each of whom arrived with Toronto in the offseason to immediately take on prominent roles within the lineup. Barrie in particular has been underwhelming since the Leafs acquired him via trade with Colorado last July, shipping Nazem Kadri out west for the defenceman and Kerfoot.

Barrie had established himself as an offensive juggernaut over eight years with the Avalanche, producing 57 and 59 points respectively in his last two seasons. So far with the Leafs, Barrie has managed just five assists in 17 games, and hasn’t looked truly at home despite past familiarity with partner Jake Muzzin from the 2015 IIHF World Championships.

Some of Barrie’s struggles can be attributed to not playing on the Leafs’ top power play unit like he did for Colorado, averaging 2:27 minutes per game on the team’s second unit instead. But as he’s continued adjusting to a new role, Barrie’s felt empowered to bring some of that trash talk he was known for in Colorado into Toronto’s room, a positive sign that his game on the ice could become more confident too.

“It's just trying to get him his own freedom right now,” said Mitch Marner about Barrie. “He's always been a great guy. He's always talkative on the ice and he's one of the talkative guys in the room so it's good to have another guy like that and it's fun to go back and forth with each other.”

“I think the more [talking] the better, he’s gotta keep giving guys a hard time,” added Tavares. “It's just about guys coming together, getting to know each other personally and building that trust and that chemistry. More and more [those new guys are] just fitting in and feeling more like themselves and comfortable in their own skin.”

As a team, the Leafs are trying to do the same thing, and continuing establishing what their identity will truly be this season. It’s early yet to say whether this strong start to November is a true turning point Toronto can hang its hat on going forward, but it’s at least shown the Leafs how they need to keep evolving to win games.

“No question we want to dictate the terms [of a game] and have the momentum as much as we can and be able to turn the momentum around,” Tavares said. “Be able to defend well, not give second and third opportunities and have to put too much stress on our goaltending to have to really step up many times throughout a game. It's just having that momentum, when you don't have it and finding ways to get it back.”