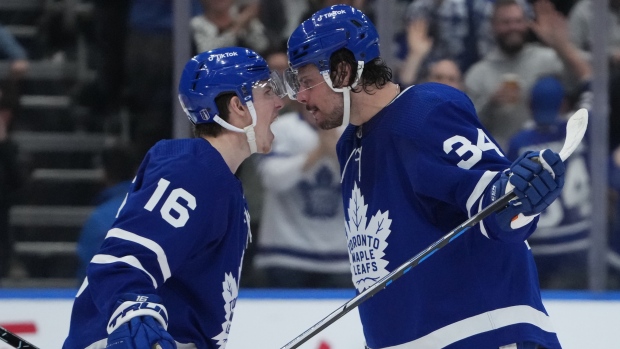 TORONTO — Auston Matthews scored the winner with 6:06 left in regulation as the Toronto Maple Leafs recovered from an early 2-0 deficit to defeat the Tampa Bay Lightning 4-3 on Tuesday to take a 3-2 lead in their first-round playoff series.

William Nylander added a goal and two assists for Toronto, which sits one victory from advancing in the post-season for the first time since 2004.

John Tavares, with a goal and an assist, and Morgan Rielly also scored for the Leafs. Jack Campbell stopped 32 shots.

Steven Stamkos, Victor Hedman and Ryan McDonagh replied for the two-time defending Stanley Cup champions, who will look to stave off elimination in the best-of-seven matchup Thursday at home.

Game 7, if necessary, would be back at Scotiabank Arena on Saturday.

Matthews snapped a 3-3 tie on a 2-on-1 rush in the third period after Mitch Marner fired a shot off Vasilevskiy's right pad into the path of Toronto's 60-goal man to bury his third of the playoffs and ignite the raucous home crowd.

The Lightning pulled Vasilevskiy late and had a couple of chances, but iced the puck with 21.9 seconds left to force the 2021 Conn Smythe Trophy winner back into his crease to effectively seal it.

Down 2-1 heading to the third, Toronto tied the score with the teams playing 4-on-4 at 3:01 when Tavares, who had been criticized for his offensive output through four games, held onto the puck in the offensive zone before finding Rielly to bury his first of the series.

The Leafs kept coming and took their first lead — the first time either team has done so in the series after falling behind — when Nylander ripped his third goal in the last two games on Vasilevskiy to nearly blow the roof off the rink.

But the Lightning responded at 8:17 when McDonagh blasted a shot past Campbell to tie things at 3-3 before Matthews won it.

The Leafs were coming off a Game 4 no-show in Tampa that saw them swarmed by the Lightning early in a 7-3 blowout.

Toronto head coach Sheldon Keefe went with the same lineup for the third straight game — including defenceman Justin Holl, who was under fire following a mistake that led to Tampa's first goal in Sunday's debacle — but shook up three of his team's four lines.

That included splitting up Tavares and Nylander, while Michael Bunting returned to the top trio with Matthews and Marner.

Toronto got an early power play to continue the series' parade to the penalty box, but couldn't connect despite some good looks for Marner.

Stamkos made it 1-0 on a shot Campbell will probably want back at 5:19 of the first on Tampa's second effort on target.

The Lightning then got their first man advantage when T.J. Brodie went off for hooking and went up by two at 6:11 when Hedman fired a snapshot that found its way through traffic inside a stunned Scotiabank Arena.

Toronto killed off a 5-on-3 power play for 30 seconds later in the period thanks to some big stops from Campbell before Nylander broke in alone coming out of the box only to be denied by Vasilevskiy.

The Leafs went to another power play — the NHL's top unit in the regular season — but once again frustrated the home crowd by not directing much of anything on goal, prompting chants of "Shoot The Puck! Shoot The Puck!" after Matthews passed to Marner for a one-timer where the winger's stick exploded on contact.

Tampa would finish the period that included seven minor penalties with a 14-5 edge in shots.

The Lightning were whistled for their second infraction of the night for too many men on the ice early in the second, and Toronto broke through when Nylander fired a shot that went in off the skate of Tavares for the captain's first goal of the series.

The Leafs continued to push as the period wore on, with Vasilevskiy forced to make a number of huge saves with the home side buzzing.

Campbell had a much quieter period at the other end, but had to make a massive stop on a Nick Paul breakaway after he stripped Morgan Rielly of the puck.

Matthews had a number of chances, but got his biggest cheer of the second after pasting Mikhail Sergachev into the glass, prompting chants of "M-V-P!"