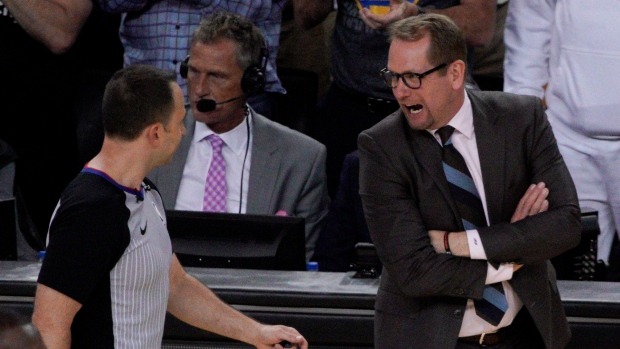 Toronto Raptors head coach Nick Nurse faced criticism after Game 5 on Monday night for his decision to take a timeout with his team up six points late in the fourth quarter.

Nurse called timeout with just over three minutes left in the game and his team up 103-97 on the two-time defending champion Golden State Warriors. The Raptors, who got 10 straight points from Kawhi Leonard before the timeout, surrendered three straight three-pointers to the Warriors after the break to lose their lead and wound up falling 106-105, missing a chance to clinch their first-ever NBA Finals on home court.

"We just came across and just decided to give those guys a rest," Nurse said of the timeout post-game. "[We] just thought we could use the extra energy push."

The Raptors, who were in the midst of a 12-2 run before the timeout, made just one of their last six shots in the game's final 180 seconds.

"At that time I felt that he probably wanted to get us some rest," Leonard said. "You never know. I mean, if we would have won the game, we wouldn't be talking about it."

The Raptors had a chance to win the game late after an offensive foul by DeMarcus Cousins, but Kyle Lowry's last-second three-point attempt was blocked by Draymond Green.

Leonard, the team's leading scorer with 26 points in Game 5, explained his decision not to shoot on the final possession.

"Well, I mean two guys came up on me. I don't know if I could have got a shot off," he said. "It's hard. If you got two guys on top of you, you have to try to find the right play. We ended up getting a shot in the corner, but it just didn't go off quick enough."

Game 6 will take place Thursday at Oracle Arena in Oakland.