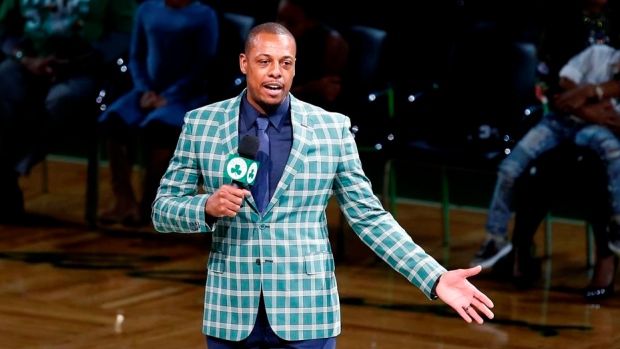 TORONTO — Even when Paul Pierce says something good about the Raptors, Toronto fans just can't get behind the former NBA all-star.

Pierce, who caused plenty of controversy with some off-court antics before and after helping the Washington Wizards sweep the Raptors in the first round of the 2015 playoffs, is now working for ESPN and picked Toronto to win in six games against the Golden State Warriors in the NBA Finals.

However, that's hardly a reason for Toronto fans to celebrate.

Pierce's track record in the playoffs has been spotty. ESPN tweeted a quote from Pierce, saying "I think it's over," after the Boston Celtics beat the Milwaukee Bucks in Game 1 of the Eastern Conference semifinal. The Bucks went on to win the series 4-1.

Then, Pierce tweeted "Bucks got this" before Milwaukee's Game 2 win over the Raptors in the East final. Toronto responded by winning the final four games of the series to advance to the NBA Finals.

Pierce also was off with a "Game of Thrones" forecast recently, tweeting "Arya will take the throne tonight sorry for the spoiler."

It has led some on social media to wonder if there is a "Paul Pierce curse."

Pierce was serenaded with chants of "Paul Pierce sucks" at Game 1 of the NBA Finals on Thursday night at Scotiabank Arena. The broadcaster seemed to have some fun with it, encouraging the fans before Toronto beat the Warriors 118-109 in the opener of the best-of-seven series.

Being a villain in Toronto is nothing new for Pierce, who was a lightning rod throughout a 2015 first-round series against the Raptors. The Toronto-Pierce feud started before the series when he told ESPN in an interview that "I don't feel (the Raptors) have the 'it' that makes you worried."

Hours after the Wizards capped a one-sided series with a 125-94 win over the Raptors in Game 4 in Washington, Pierce took a parting shot by posting a photo on Facebook that depicted him on a throne under the headline "King in the North."

Drake, the Raptors' global ambassador, wasn't safe from Pierce's jabs either. The 37-year-old posted a picture of the Toronto rapper wearing a Wizards jersey under his button-up shirt, along with the words "If You're Reading This The Wizards Just Swept." It was a takeoff of Drake's mixtape "If You're Reading This It's Too Late."