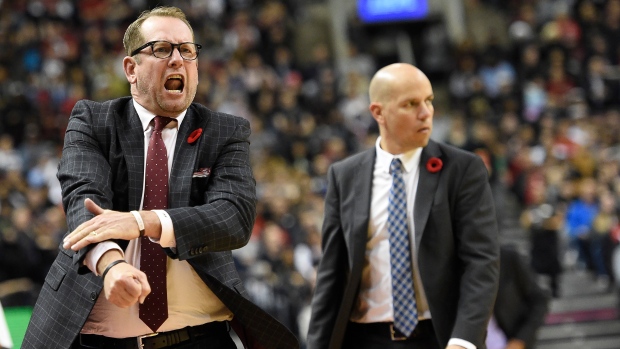 The Toronto Raptors and the New Orleans Pelicans opened the season against each other nearly three weeks ago.

The host Raptors prevailed 130-122 in overtime and that set the tone for both teams' seasons so far in the young campaign.

Defending NBA champion Toronto has lost just twice since while New Orleans has won just once going into a rematch in New Orleans on Friday.

Both teams are emphasizing defense going into their final meeting this season.

The Pelicans have been plagued by poor defense, allowing an NBA-worst 124.3 points per game.

The Raptors have been much better, allowing just 108.7, but they did have lapses in a 124-120 home victory Wednesday night against Sacramento, which tied a franchise record by making 20 3-pointers.

"I don't know how many of those were contested," Raptors guard Fred VanVleet said. "Not enough for us -- a lot of breakdowns, falling asleep."

"We didn't win like we wanted to," forward Pascal Siakam said, "but we got the win and that's all that matters."

The Raptors will see how many more wins they can get during a challenging five-game road trip that also includes a stop in Los Angeles to play both the Lakers and the Clippers as well as visits to Portland and Dallas.

"It's a good test," VanVleet said. "This is some of the tougher stretches of the NBA year going on a long road trip like this. It's good early in the year to go through these stretches, go on the road, be tired back to back, see what you got and try to keep improving. This is a good stretch to see what we can do."

The Pelicans got their only victory of the season in their last home game, defeating Denver 122-107 on Oct. 31. But then they lost road games against Oklahoma City and Brooklyn.

Coach Alvin Gentry said the team will try to simplify some of its defensive concepts.

"It's hard to pinpoint one issue," guard JJ Redick said. "We're pretty poor in a lot of areas."

In the game against the Nets, the Pelicans fell behind by 19 points in the first half, got within a field goal late in the fourth quarter and eventually succumbed after committing 21 turnovers.

"Another thing that's one of the biggest problems for our defense is our turnovers. When you're turning the ball over and teams are running at you with numbers, that makes all of your defensive stats go up."