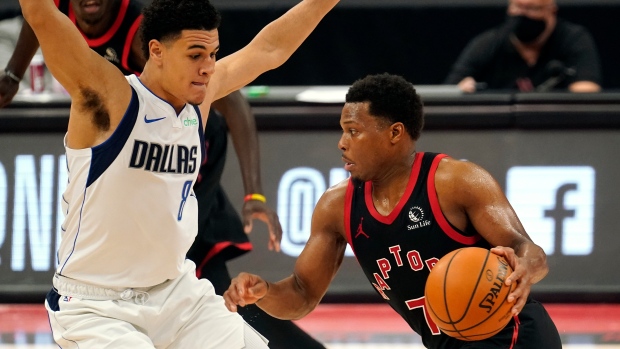 TORONTO – With about seven minutes remaining in Monday night’s game, and the Raptors starting to pull away, Luka Doncic couldn’t hide his frustration.

The Mavericks have underachieved to start the season. They’ve been hit hard by COVID-19 early in the year, with several of their regulars missing multiple games under the league’s health and safety protocols, and were coming off a tough loss in Chicago 24 hours earlier.

Still, the 21-year-old Slovenian hasn’t had many nights like this. Already one of the sport’s four or five best and most dynamic players, Doncic is used to lighting teams up, even in defeat.

On Sunday, he had 30 points… by halftime. He finished with 36, to go along with 16 rebounds and 15 assists – his fourth triple-double of the campaign, and 17th since the start of last season, four more than LeBron James and Nikola Jokic to lead the NBA.

However, the Raptors were in the process of doing something that very few teams have been able to pull off successfully since the talented guard broke into the league. They neutralized him.

So, when Stanley Johnson – one of the Toronto defenders most responsible for locking him down – picked him up full court and leaned into his body, Doncic turned and caught him in the chin with his elbow.

"I’ve got hit harder before," Johnson said following the Raptors’ third straight win – a convincing 116-93 victory over Dallas. "We’re playing basketball. We’re not gonna give each other hugs."

"I feel like we [frustrated him], I really do… I know Luka. He's not a bad guy. I thought he was frustrated. When you're tearing up the league like he is, he's putting 30-point triple-doubles on guys, and you get a team that is locked in on the game plan, and they're taking stuff away from you, that's what happens. Everybody has a tough night. It happens to everybody. So tonight was his night."

Doncic finished with 15 points – his third-lowest scoring output since the start of 2019-20, and 13.3 points fewer than his season average. He only attempted 11 field goals – nearly half the shots he usually takes.

Nick Nurse’s team threw multiple looks at him throughout the evening, including the box-and-one – the "janky" defensive coverage they famously used on Steph Curry and the Warriors in the 2019 NBA Finals. They denied him the ball. They pressured him when he caught it. They switched pick and rolls, so it was a team effort, as Johnson pointed out afterwards, but he and OG Anunoby were given the bulk of the assignment and they executed the game plan to perfection.

"Give those guys, both of ‘em a lot of credit," Nurse said. "OG and Stanley took the challenge and worked at it. They really worked at it all night, they were just constantly there applying pressure and, again, I give them both credit.

They’re similar builds, and they’ve got the strength and some foot speed, Most of [it] is desire, and I think they both played with desire all night."

It was the their fifth win of the campaign, and third straight, but it was the first time that the Raptors have actually looked like the Raptors, at least for anything close to 48 minutes. It was the kind of victory they prided themselves on a year ago, a calling card of the team that finished the 2019-20 season with the league’s second-ranked defence and second-best record.

Much of their success was a result of their sophisticated defensive schemes. They would change them up on the fly and tailor their game plans with the opposition’s best player in mind. They were star stoppers. James, Kawhi Leonard, Damian Lillard, Joel Embiid, among other elite scorers – some their worst offensive games of the season came against the Raptors’ defence. It was a credit to the team’s coaching staff and preparation, but more than anything else, Toronto had the personnel to pull it off – both in terms of talent and, just as importantly, basketball intellect.

For whatever reason – and there are likely a variety of them – this season’s team has struggled to rediscover that identity. They came into the week ranked 23rd in defence, surrendering 111.1 points per 100 possessions – 6.4 more than they gave up last season. They had shown glimpses of being that elite defensive group, but those flashes were too infrequent and came in short spurts.

Their hope is that Monday’s win can be the start of a resurgence on that end of the floor. If nothing else, it should have reinforced why defence remains Nurse’s priority.

The Raptors are not good enough offensively to simply rely on outscoring teams every night. They’re a high-volume three-point shooting team, which means their points will come in bunches and there will continue to be stretches where jumpers aren’t falling and they can’t seem to score. When they’re not defending at the level they’re capable of, those droughts can cost them games that they’re accustomed to winning, like we’ve seen on a few occasions to start the new campaign.

In the first half against Dallas, their two leading scorers – Fred VanVleet and Pascal Siakam – combined to score six points on 2-of-14 shooting, and they hit just two of their 17 three-point attempts as a team. Still, their defence kept them in it long enough for the offence to come around. Siakam scored 15 of his 19 points in the second half, while the Raptors shot 10-for-16 from beyond the arc and outscored the Mavs 69-46 over the final 24 minutes.

"I think we’re just getting better," said Kyle Lowry, who scored a team-high 23 points. "I think we’re getting more confident in ourselves. I think we’re more comfortable with what we’re trying to do offensively and defensively."

The question is whether they can still be an elite defensive team. Although Chris Boucher has been a revelation for them off the bench this season – and continued his torrid stretch with 21 points and 10 rebounds on Monday – they’ve missed the veteran savvy of Marc Gasol and Serge Ibaka anchoring the backend of their defence. Newcomers Aron Baynes (who started and played 11 scoreless minutes) and Alex Len (who remains out due to the health and safety protocols) have looked out of place.

Perhaps Johnson’s emergence offers some hope – not only as a lock-down perimeter defender and small-ball big off the bench, but also as proof that it can take some time to learn and get comfortable in the Raptors’ system.

"If anybody watched last year, me trying to figure out the system, it was pretty bad to start off with," said the self-aware 24-year-old, who played sparingly in his first season with the club, but has earned a spot in Nurse’s regular rotation on account of his energy and defence. "I have a lot of faith in the guys that we are going to figure it out together. We are in the gym every day. We work at this stuff hard. Everybody works so hard at what we do. It’s complicated, but it’s something you can learn. It takes reps. It takes time. I’ve been here over a year and a half and I’m just getting it. Give guys some time, man."

That he and the Raptors were finally able to get under somebody’s skin and make life tough for an opponent again is an encouraging sign that they’re getting closer to finding themselves.​​