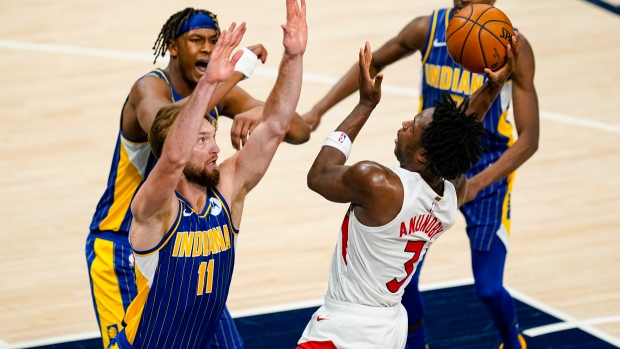 The shorthanded Toronto Raptors earned a hard-fought road victory over the Indiana Pacers on Sunday. They’ll have a chance to sweep a back-to-back set as the teams meet again tonight at the Bankers Life Fieldhouse in Indianapolis.

Catch the action LIVE at 7 p.m. ET/4 p.m. PT across the TSN Network and on TSN Direct.

With All-Stars Kyle Lowry (toe infection) and Pascal Siakam (left knee swelling) missing from the starting lineup, the Raptors gutted out a 107-102 victory over the Pacers in a Sunday matinee contest.

Both Lowry and Siakam are listed as questionable, ahead of Monday's game..

OG Anunoby led all scorers with a season-high 30 points, collected eight rebounds and made clutch free throws down the stretch to help secure the victory.

Fred VanVleet scored 21 points, playing more than 40 minutes and Norman Powell, who started the game, chipped in with 20 points and a team-leading six assists.

Stanley Johnson was also added to the starting lineup and had six rebounds, four assists and one steal to go along with three points.

"They played hard, that’s for sure,” head coach Nick Nurse said after the victory. “Gotta really compliment the whole group there for putting in the effort. It’s good to be rewarded for that effort. Took all 48 minutes of work.”

The Raptors (7-9), who once sat second last in the Eastern Conference, have won two in a row, five of their past six and are tied with two other teams for ninth in the standings.

The Pacers were led in the loss by Myles Turner who scored 25 points and added six blocks. They have dropped three of their last four games and are now fourth in the East with a 9-7 record.

Following Monday’s game, the Raptors will return to Amalie Arena in Tampa, where they will welcome the Milwaukee Bucks, Sacramento Kings and Orlando Magic during a three-game home stand.