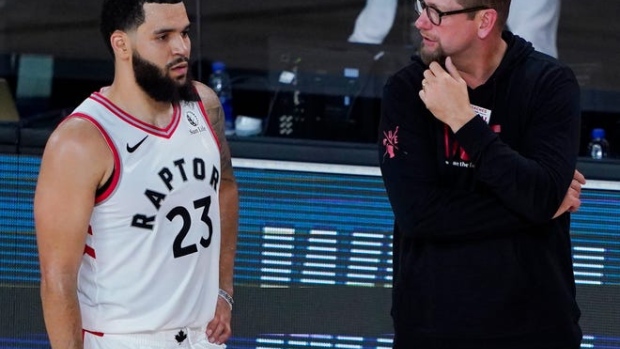 VICTORIA — Fred VanVleet vows he'll be smarter with his body and more conscientious of his playing time this season.

But Toronto Raptors coach Nick Nurse says it's easier said than done. It's a great idea — in theory.

The 28-year-old earned NBA all-star honours last season, but logged a back-breaking 37.9 minutes a night. The wear and tear was costly — he missed the Raptors' final three regular-season games, and Games 5 and 6 of their opening-round playoff series against the Philadelphia 76ers with a strained hip flexor.

The Raptors opened camp on Tuesday at the University of Victoria, and Nurse said it was great to have 20 healthy players — VanVleet among the most essential.

Nurse said trying to manage the point guard's minute was similar to trying to corral former guard Kyle Lowry. And with VanVleet missing 17 games last regular season, the coaching staff learned a lot about adjusting for his absence.

"The hard part about it, too, is when we all sit down in chairs in an office, it seems easy," Nurse said. "Well, it's not the same as when the ball's up and you're in a tough game, it's a one-point game, and you got three minutes to go, and you're saying, 'Oh, jeez he's at 38 minutes, if we don't take him out, now he's gonna go to 41. And we're on the road. And it's a one-point game in Miami. That's kind of the real life that's different than we're all standing here without the heat of the battle, or sitting in our offices without the heat of the battle.

"But the point's been brought to my attention," he added, with a laugh.

VanVleet is headed into the third season of a four-year, US$85 million deal, but is eligible to sign an extension as of Oct. 17.

"I will just say that I love being a Raptor," VanVleet said at Monday's annual media day. "I have a great relationship with management, ownership, coaching staff. There's nothing I could really ever complain about being on this team. But I'm not going to speak on contractual things, so you guys will know when it's time to know.

"I'm happy with where I am and I think it’s a mutual love."

Raptors president Masai Ujiri spoke glowingly Monday about the Rockford, Ill., native — "Mr. Bet on Yourself" — who went undrafted, but played his way into a roster spot at training camp in 2016.

"Whether it's now or later on, Fred is beloved to us," Ujiri said. "Hopefully, we'll figure (it out)."

He admitted that amid the excitement of the Raptors' stretch run last season — they finished fifth in the Eastern Conference and took Philly to six games in the first round of the playoffs — he ignored his body.

"Definitely had to listen to my body," he said. "We lost and I had to go to the doctor and all those things to plan out the rest of my summer. I had to get stronger. I had to make some changes and I did those things, and I feel great."

Nurse sees VanVleet playing off the ball a lot this season, a luxury the Raptors have with their versatile roster.

"That's where we've seen again, the shift in Scottie (Barnes), Pascal (Siakam), even O.G. (Anunoby) probably, bringing it up the floor," Nurse said. "I love that you guys (media) know I love it. Because that gets those guys in not necessarily open floor situations, but defence on the move situations.

"And you got Freddy, and Gary (Trent Jr.), some of those guys on the perimeter are ready to shoot … so it's a good way to create some early offence."

The Raptors end camp with an open scrimmage on Friday, and then fly to Edmonton to face the Utah Jazz to open the pre-season on Oct. 2.