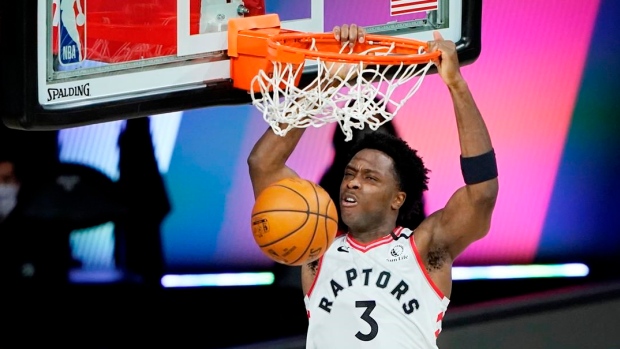 Toronto Raptors forward OG Anunoby will not play tonight's game against the New York Knicks, as the team will hold him out to rest on the second night of a back-to-back.

A rest night for OG Anunoby vs the Knicks this evening, Raptors are holding him out in the second game a back-to-back. Kyle Lowry is listed as questionable, though Nurse indicated he’s likely to return. VanVleet, Watson, Harris remain out. Khem Birch is expected to make his debut

After missing seven of the last eight games with a foot infection, point guard Kyle Lowry will be back in the lineup against the Knicks.

After missing 7 of the last 8 games with a foot infection, Kyle Lowry is back in the lineup tonight vs the Knicks.

Newly signed centre Khem Birch is expected to make his Raptors debut. The Canadian averaged 5.9 points and 5.1 rebounds in 19.8 minutes per game this season with the Orlando Magic this season.