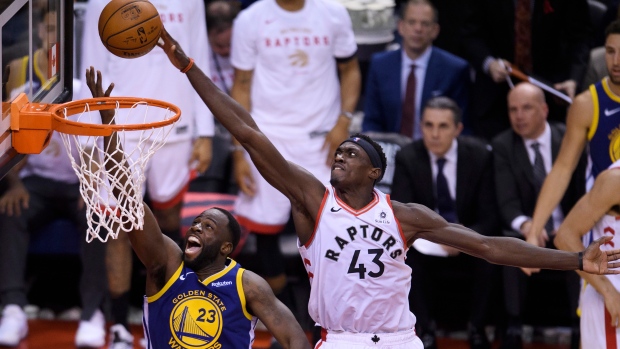 TORONTO - The Raptors were always going to lock up Pascal Siakam, it was just a question of when and how.

Talks have been ongoing since July, but with Monday's 6 p.m. ET deadline looming, the two sides agreed to terms on a four-year, $130 million maximum contract extension Saturday afternoon, sources confirm to TSN. First reported by ESPN, Siakam's new deal will kick in following the 2019-20 season.

"I love Toronto," Siakam told TSN on the eve of training camp last month. "I love being here. The fans have seen me grow and seen how I evolved each and every year. I don't have to say they're the best in the NBA [because] they already know [they are]. I'm excited, man. I love Toronto and I'm definitely hopeful we can get it done."

Siakam, 25, was eligible for a five-year max extension worth roughly $170 million. Whether he signed for four or five years, his camp held firm on their asking price throughout the negotiation process. They believed he deserved a max deal, and while Toronto didn't disagree, it was a complicated decision for the team.

Had Siakam gone into the final year of his rookie deal without an extension, he would have become a restricted free agent next summer. In that scenario, the Raptors could have matched any offer he received from another team, and even at max value it would have been roughly the same amount he just signed for.

Waiting to sign him in free agency, as opposed to extending him now, would have allowed the team to maximize their cap space in the summer of 2020, while also giving them another full season to evaluate how much he's worth.

That they opted to avoid going down the free agency route speaks to their confidence in and commitment to the player. It almost certainly earns them some goodwill with Siakam and his representatives, but it also makes a statement - privately and publicly - that they see him as a cornerstone of the future.

Siakam has come a long way in a very short amount of time. Famously, he didn't start playing organized basketball until he was 18. From Cameroon to New Mexico State, the Raptors made him a surprise 27th-overall selection at the 2016 NBA draft.

After falling out of the rotation midway through his rookie year, he began to blossom as a sophomore before breaking through last season. Siakam was a revelation, recording 16.9 points, 6.9 rebounds and 3.1 assists on 55 per cent shooting, while raising his three-point shooting from a historically inefficient 22 per cent to 37 per cent, above league average. He became the second scoring option on a championship-winning team and earned the NBA's Most Improved Player award for his efforts.

With Kawhi Leonard leaving in free agency over the summer, Siakam's role will expand this coming season. The Raptors will give him every opportunity to prove he's ready to take another big leap - going from budding star to featured player and perhaps even the next face of the franchise.

"Just to even be mentioned [as a potential franchise player] is an honour," Siakam told TSN on media day. "For me, I don't really focus on that to be honest with you. I don't want to sound like I'm too humble or anything like that, but I'm really not focused on that. I just want to continue to get better and I think basketball will speak for it. If I go out there and I ball out then we can talk about that later. For now I'm just focused on basketball and trying to get better and helping this team win."

Siakam's work ethic, approach and commitment to growing his game are among the biggest reasons why the Raptors felt comfortable betting on him. He made just over $4 million in his first three NBA seasons and will be one of the league's biggest bargains earning $2.4 million this season, but even when his well-deserved raise kicks in ahead of the 2020-21 campaign they have no reason to believe his motivation will change.

After making Kyle Lowry's one-year extension official earlier this week, and now agreeing to terms with Siakam, the Raptors have essentially taken themselves out of the running to sign a high-priced free agent next summer. However, the free agent class in the summer of 2020 is expected to be underwhelming. By design, they're lined up to have significant cap space available the following summer when they'll hope to pair Siakam, their homegrown star, with another marquee player. Several superstars, including Bucks forward and the reigning NBA MVP Giannis Antetokounmpo, could be available.