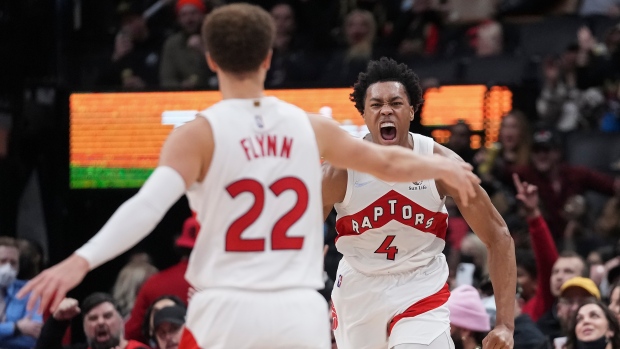 For the 11th straight season, the Toronto Raptors will begin their NBA season at home - this time with a matchup against the Cleveland Cavaliers on Oct. 19.

As the Raptors embark on their 28th campaign, the game with Cleveland will feature Rookie of the Year Scottie Barnes going up against Evan Mobley, the fourth and third overall draft picks, respectively, in 2021.

Notable visits to Scotiabank Arena include the defending-champion Golden State Warriors on Dec. 18 and LeBron James and the Los Angeles Lakers on Dec. 7.

Celebrating the life of Nelson Mandela, the eighth annual Giants of Africa Game takes place on Dec. 5 against the Boston Celtics.

The Raptors will host Kyle Lowry and the Miami Heat on Nov. 16 and March 28.

The Philadelphia 76ers, who eliminated the Raptors in six games in the first round of the playoffs last season, will visit the Raptors for a pair of home games on Oct. 26 and 28.

The Raptors will conclude the regular season against the Milwaukee Bucks on April 9.