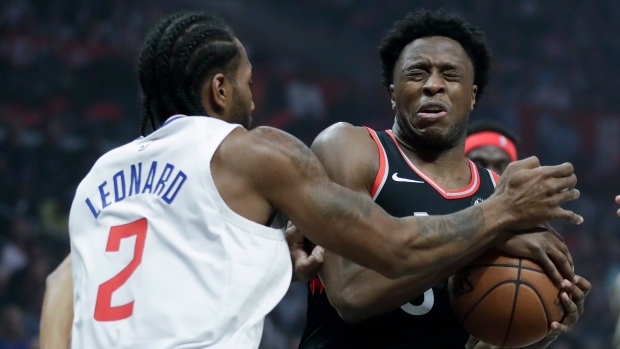 The Toronto Raptors wrap up their four-game west coast road trip Tuesday night with a date against former teammate Kawhi Leonard and the Los Angeles Clippers from Staples Center in California.

The Raptors are 1-2 on the road trip, but are coming off a impressive 121-114 victory over LeBron James and the defending NBA champion Los Angeles Lakers on Sunday night.

Veteran guard Kyle Lowry scored 37 points and added 11 assists while Pascal Siakam had 39 points and 13 rebounds for the Raptors, who were without Fred VanVleet, OG Anunoby, Chris Boucher and Gary Trent. Anunoby, Boucher and Paul Watson Jr. will all miss Monday's game while Trent is doubtful.

Serge Ibaka and Pat Beverley are out for the Clips.

Holding a 27-38 record with just seven games remaining on a trying 2020-21 season, the Raptors sit three games behind the Washington Wizards for 10th place in the Eastern Conference, the final spot for the NBA's new play-in tournament.

The 43-22 Clippers have already clinched a playoff spot in the Western Conference, but have dropped three games in a row. Leonard returned to the hardcourt Saturday against the Denver Nuggets after missing eight of the previous nine games with right foot soreness, which he has been dealing with throughout the year.

"I'm feeling good," Leonard told ESPN on Sunday. "We took the proper steps to get me right, to make sure nothing significant is wrong with me ... so hopefully we can just keep moving up from here."

The 29-year-old Leonard is averaging a team-high 25.5 points this season alongside 6.6 rebounds and 5.1 assists.

Former Raptor Serge Ibaka as well as Patrick Beverley are out for the Clippers with injures.

Following their game against the Clippers, the Raptors return "home" to Tampa, Florida where they'll take on the Wizards in a pivotal matchup on Thursday. The Clippers and Raptors meet again next Tuesday at Amalie Arena.

The Raptors haven't missed the playoffs since the 2012-13 season.