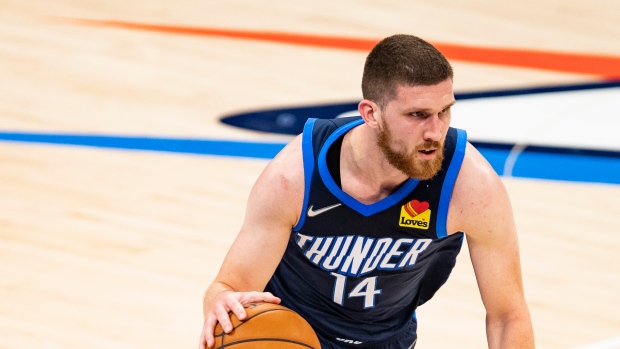 The Toronto Raptors and free agent forward/guard Sviatoslav Mykhailiuk have agreed to a two-year contract, according to Shams Charania of The Athletic.

Svi Mykhailiuk's deal includes a player option in the second season. Several contenders expressed interest in the sharpshooting wing before he reached agreement with the Raptors. https://t.co/rZopT5lH6B

The deal includes a player's option for the second season.

Charania notes that several contenders expressed interest in the 24-year-old native of Ukraine before he joined the Raptors.

Mykhailiuk averaged 8.5 points, 2.5 rebounds and 1.7 assists over 66 games split between the Detroit Pistons and Oklahoma City Thunder. He shot 41.1 per cent from the field and 33.4 per cent from behind the arc.

OKC acquired Mykhailiuk from the Pistons on March 13, 2021.

In 164 career games in the NBA with the Los Angeles Lakers, Pistons and Thunder, Mykhailiuk has averaged 7.3 points, 1.8 rebounds and 1.5 assists.