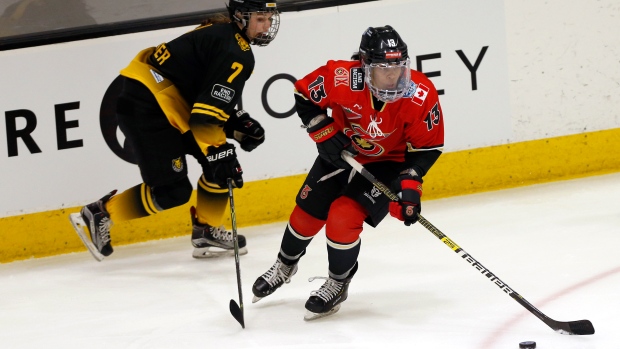 The 22-year-old Brampton, Ont., native led the Six to a regular season title, scoring a league-high five goals in six games while tying for the NWHL lead during the Lake Placid competition with nine points.

The Merrimack College all-time leader in points added a goal and an assist in the Isobel Cup semifinals to bring her 2021 total to 11 points over seven performances in her first full NWHL campaign.

"It means a lot, honestly, everyone else that was nominated for this award was amazing and the talent throughout the season was awesome," said Grant-Mentis.

"To get this award means so much. I owe it all to my teammates and my coaches. I couldn’t be here without them."

Grant-Mentis also won the newcomer of the year award.

Boston Pride blue liner Kaleigh Fratkin, from Burnaby, B.C., was named the top defender for the second year in a row. The 29-year-old produced a league-high nine assists in seven regular-season games before going on to capture the Isobel Cup.

Amanda Leveille of the Minnesota Whitecaps won goaltender of the year. The Kingston, Ont., native went 3-1-0 wit ha 2.47 goals-against average and .936 save percentage.

It's the second time the 26-year-old has been named the league's top goaltender following the 2018 award while with the Buffalo Beauts.

This report by The Canadian Press was first published April 28, 2021.