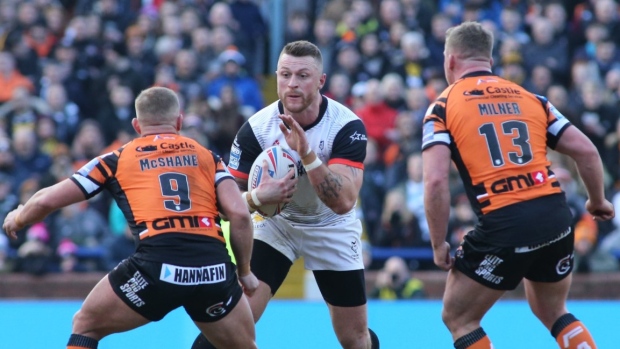 LEEDS, United Kingdom — The Toronto Wolfpack saw their 23-game win streak come to an end Sunday with a 28-10 loss to Castleford Tigers in their Betfred Super League debut.

The defeat was Toronto's first since a 46-16 loss at Toulouse on March 9, 2019 in the second-tier Betfred Championship.

Playing their first match in the top-tier division after earning promotion, Toronto raced out to a 4-0 lead on a Liam Kay try three minutes in, but Castleford stormed back with 22 points to take a 22-4 lead into halftime.

Kay's try was his 65th in his last 63 appearances.

Hakim Miloudi added a second-half try for Toronto with 20 minutes remaining when he stole possession from the Tigers and sprinted 60 metres to give the Wolfpack late life.

Toronto nearly added to its score in the 66th minute when Adam Sidlow crossed the line, but an incredible effort from the Tigers defence saw Sidlow unable to ground the ball.

"I could be talking about how proud I am and all that type of thing that the players never give in, you could see there was some energy there at the back end of the game," said Wolfpack coach Brian McDermott. "So what we've got is a bit of a platform to play from, a foundation, but clearly there are some areas we have to get better at."

Star off-season signing Sonny Bill Williams wasn't in the starting lineup but came in off the bench near the end of the first half.

"It didn't go to plan but at the end of the day, that's the game of footy," Williams said. "You win some and you lose some. From a team point of view I am very disappointed but individually I'm just glad I got back out there and got a taste of it and started to get my rhythm.

"I've got something to work on, a good base."

Leading 4-0 after Kay's try, the Wolfpack pressed forward again in the following set but an errant pass from skipper Josh McCrone saw Castleford's Eden electrify his home crowd with a length of the field sprint to give his team the lead.

Millington then stretched that lead for the Tigers in the 18th minute thanks to a stretch of his own, successfully searching for the line amid a desperate Wolfpack tackle.

Castleford came close to registering a third consecutive try moments later before McCrone produced a solid defensive effort within millimetres of the line to recover the ball. But repeated handling errors continued to haunt the Wolfpack, and the Tigers pounced on a mistake to extend their lead to 12 points on Shenton's 150th try in a Castleford uniform.

"So, good in many respects, I thought Castleford could have caused us a bit more damage but it seem that they took the foot off the gas for the final fifteen minutes which I suppose allowed us to get into the game."

The bottom team in the 12-club table drops out of Super League at the end of the season.

The Wolfpack played in the second-tier Championship the last two seasons and hadn't played a Super League opponent in a competitive game since the 2018 promotion playoffs.

Toronto won the second-tier Championship with a 26-1-0 record last year, then beat Toulouse Olympique and Featherstone Rovers in promotion playoffs.