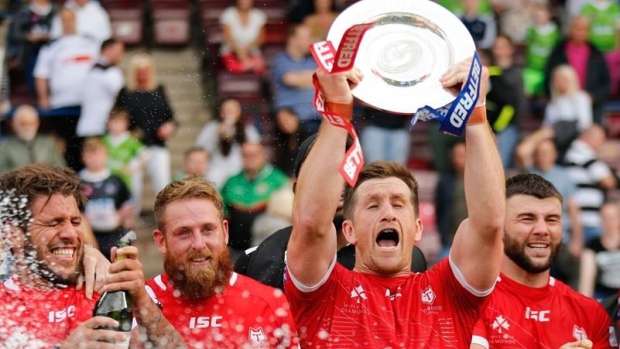 The Toronto Wolfpack are hurting ahead of their debut Sunday in Super League.

The transatlantic rugby league team has injury question marks over forwards Darcy Lussick and Bodene Thompson, while Australian-born New Zealand international back Chase Stanley is dealing with visa issues and has yet to arrive in England.

The Wolfpack open life in the top-tier Betfred Super League on Sunday against Castleford Tigers at Emerald Headingley Stadium in Leeds. Sunday's game is part of a Super League doubleheader, with the host Leeds Rhinos facing Hull FC in the late game.

With just 23 players on his roster due to salary cap constraints, Toronto coach Brian McDermott has little room to manoeuvre. Rugby league teams dress 17 players for games, including four on the bench.

"We don't have a full squad to choose from but we've certainly got a good team that we're going to field on Sunday," McDermott said optimistically from England.

Lussick is the major concern with a groin injury that may need surgery.

"We'll find out that over the next 48 hours," said McDermott.

Lussick, an Australian who played in the NRL for Manly Sea Eagles and Parramatta Eels prior to joining Toronto, reported to camp in great shape after an off-season that saw him win his pro boxing debut Down Under.

But the six-foot-four 251-pounder felt a pull in his groin in a training session last week.

"We think he's done his hernia, which in itself is not a big deal. But if he needs that operated on, it's usually anywhere between a month and six weeks," said McDermott.

Star signing Sonny Bill Williams is healthy and will see action Sunday, likely off the bench. McDermott is unwilling to rush the former All Black as he makes his return to rugby league from rugby union.

The Wolfpack are hoping to get salary cap help from rugby league authorities to expand their roster, arguing that they are not eligible for the same financial breaks as their rivals because the North American franchise does not have an academy or access to some of the developmental paths that other Super League teams can use.

The Toronto team has won another argument with Super League and its main sponsor Betfred, allowing Williams to cover up the Betfred logo on his jersey. The 34-year-old Williams is a convert to Islam, which condemns gambling.

The Wolfpack won promotion on Oct. 5 with a 24-6 win over Featherstone Rovers in the Million Pound Game. That earned them a spot in the Super League, the top rugby league circuit in the Northern Hemisphere, alongside 10 English clubs and France's Catalan Dragons.