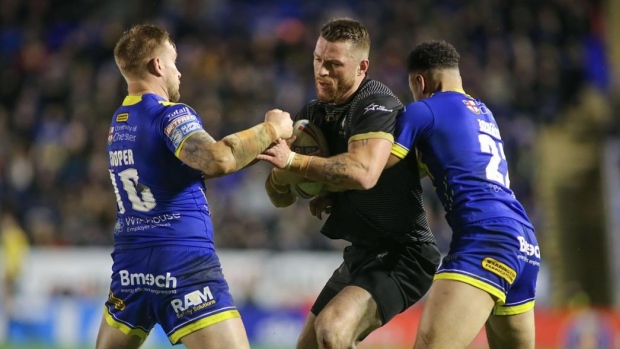 Toronto Wolfpack fans are familiar with the sight of giant forward Adam Sidlow running with the ball, dragging would-be tacklers with him.

The six-foot-four 251-pounder left a mark, either as a starter or impact player off the bench.

"All successful teams need players like Adam," said Wolfpack coach Brian McDermott. "Professional to the core. Unconditionally willing to do whatever the team needs from him. Tough and resilient. And a great leader.

"He’s been more than a significant part of the Toronto Wolfpack journey."

Sadly that road ended Monday when Super League rejected the financially troubled franchise's bid for reinstatement in 2021 under new ownership.

Sidlow, an original member of the Wolfpack, had been hoping the Toronto team would get a reprieve.

"It's been one of the best experiences in rugby league I've had," the 33-year-old said from Wigan, England.

But after three years of success on the field that resulted in promotion to the top-tier Super League, the franchise ground to a halt. First it was the pandemic in March. And then, in July, it was majority owner David Argyle running out of money.

"My first initial reaction was just shock, anger ... and a bit of confusion as well," he said. "The first thing I said to my wife was 'I don't know if I'm relieved because we've been waiting so long, because we've got a decision finally.'"

"It wasn't meant to be and I hope it's not to the detriment to the sport," he added.

The Wolfpack last played March 11, defeating Huddersfield Giants 18-0 in Coral Challenge Cup play. The last paycheques were issued June 10 with the club standing down July 20 saying it could not afford to resume play this season.

Sidlow's contract with the Wolfpack runs through 2021. Does he think he will ever see that money?

Sidlow was a constant in Wolfpack colours. He played 50 or 51 straight games — he couldn't remember which at the time — until a minor hamstring tear suffered in March 2019 sidelined him briefly.

Hard to stop with ball in hand, Sidlow is adept at keeping attacks alive by offloading the ball to teammates in the tackle. On defence, he hits like a hammer.

McDermott says whichever club lands Sidlow will benefit from the move. "A valuable addition to any team's roster right now," he said.

Sidlow believes there is more rugby in him. But he held off joining another club, hopeful the Wolfpack might return and knowing that any offers out there would not be that generous given Toronto's status.

"It's been an eye-opener," said Sidlow. "In one sense, I'm in a privileged position in that I've got a lot of good family around me who help me out."

He has been working the last few months with his father-in-law's groundworks company — operating a dumper.

"I thought I'll go out, get a job, earn some money. Everybody's got to do that for the family," said Sidlow, who has sons aged six and 11 and a nine-year-old daughter. "But mentally it's been a struggle."

The hardest part was waiting word on the Wolfpack's future, with decisions being delayed again and again.

"And then It gets dragged out to a decision that in my view is the wrong decision for the sport. But it can't be helped now," he said. "I feel for a lot of other people who aren't in as privileged a position as me. I know some lads have struggled and I just hope someone steps in and helps with the mental side of it. Because rugby lads do find it hard to come forward and say that they are struggling. But anyone can see this could cause some mental issues."

He didn't have any problems with the front office during his time with Toronto "other than the odd late payment."

"But up until this year, we did get our money so that wasn't a problem."

And he knows people put in long hours off the pitch to try to make the franchise a success.

"We know that it doesn't just take us running out on the rugby field to create a team or a brand. They made mistakes obviously, but they said they wanted to get into Super League and they did. It took a lot of hard work but I thought they were on the right track.

"But for a global pandemic, we might not be having this conversation now."

Sidlow calls Argyle "a good chairman, to a degree, up to the end."

"What he's done to these people and families, not paying them, I totally disagree with. He's brought a lot of misery in what he did by just stepping down and stopping paying. But I can have a look on the other side of the fence and say there's been a global pandemic. And the guy has put a lot of money into it and just run out of money. I can't bad mouth him too much because I've really enjoyed these past few years that I've been there (in Toronto).

"it must be a struggle (for Argyle). I hope we can come to an agreement and get it sorted with everyone's money," he added.

While leaving his family to play in Toronto wasn't fun, Sidlow says the chance to see and play in North America was special. As was the fan response.

"The actual amount of energy that they bring when they come to the game and the passion that they show as fans was brilliant."

It also gave him a chance to bring his family over to Canada "which I possibly may never have done but for the Wolfpack."

In a 2019 interview with The Canadian Press, he credited his wife for giving him the green light to come to Canada.

"She said 'You'll regret it if you don't jump at it with two hands and take that opportunity,''' he recalled. "So I've got a big thank you to say to her for that really. It's one of the best things I've done.''

This report by The Canadian Press was first published Nov. 3, 2020