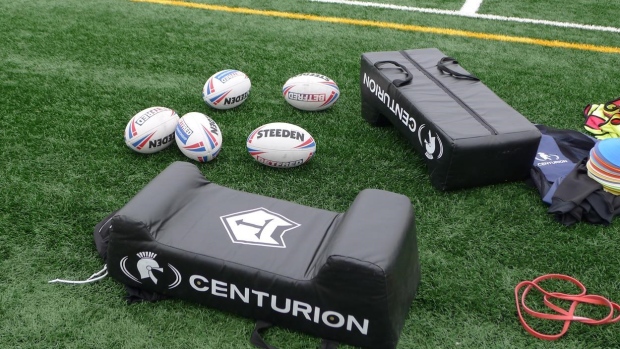 Toronto Wolfpack players, who have not been paid since June 10, have received a second "hardship payment" from English rugby league authorities.

Spokesmen for Super League and the Rugby Football League confirmed the payments had been made from Super League's hardship fund for players. They declined further comment.

Wolfpack chairman and CEO Bob Hunter confirmed the $1,000-pound ($1,700) payments, saying it was the second such cheque the players had got from the league fund. He said the Wolfpack pushed for the payments, with the first coming from a bond of some 30,000 pounds ($50,900) the transatlantic team had put up in the past.

"Both were great and stepped up," Hunter said of Super League and the RFL.

Toronto has been in limbo since announcing July 20 that it could not afford to finish out the Super League season. Super League subsequently tore up the Wolfpack's participation agreement and expunged Toronto from the 2020 season standings.

Majority owner David Argyle, who could no longer fund the club, has since stepped away. Toronto businessman Carlo LiVolsi wants to buy the franchise, but the sale is tied to the club staying in Super League.

Argyle, a Toronto-based Australian entrepreneur who specializes in mining and natural resources in emerging markets, has offered a personal guarantee for the player pay but has not been in a position to make good on it. He has said the original ownership group poured $30 million into the franchise.

LiVolsi has pledged to take care of the players.

Toronto has submitted a new business plan in its bid to return to Super League under LiVolsi's ownership. A decision is expected later this month or in early October.

Hunter said he and other team officials are currently going over Super League/RFL questions on the business plan and LiVolsi — with the answers due Tuesday.

Toronto has been actively lobbying for a return to Super League, asking players and supporters to speak up on social media while talking to Super League owners behind the scenes.

"It really is for us to convince them that Carlo — and I know he does — has the sustainability to sort of ride the wave of pro sports," said Hunter. "Those kind of conversations are taking place all the time."

The Wolfpack started play in 2017, earning promotion from the third-tier League 1 and second-tier Championship. Toronto debuted in the elite Super League this year, recording six straight losses before the season was halted in mid-March due to the pandemic.

The league has since resumed play before empty stands with 11 teams — 10 from England and France's Catalan Dragons.

This story by The Canadian Press was first published Sept. 14, 2020.