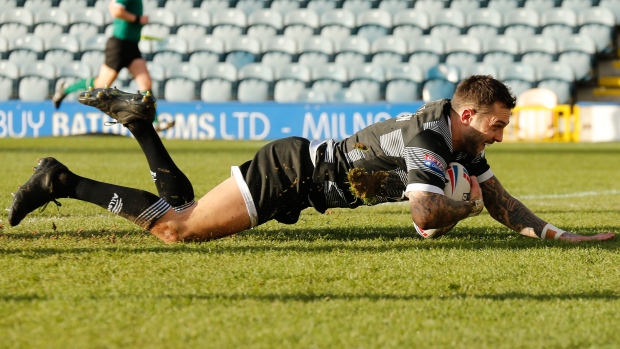 BRADFORD, England — The Toronto Wolfpack reeled off 17 unanswered points in the second half to run their winning streak to 17 games with a 25-20 comeback victory over the Bradford Bulls in rugby league play Sunday.

Toronto went into the break trailing 18-4 at Odsal Stadium but pulled ahead with three tries in 10 minutes early in the second half.

"I thought we were lacklustre in the first half. Bradford played way better than we did," said Toronto coach Brian McDermott.

"We had a purple patch in the second half and that got the scoreboard back going our way. And after that it was a contest ... I feel very fortunate that we won that," he added.

Trailing 21-18, Bradford closed the gap to one point in the 74th minute on a Joe Keyes penalty after Toronto's Bob Beswick and Bodene Thompson were penalized for a dangerous tackle.

Bradford's Jordan Lilley tried a long-range drop goal in the 75th minute but was wide in his attempt to tie the score. Toronto got the ball back, drove down the field and Nick Rawsthorne hauled in a Blake Wallace kick for an insurance try in the 76th minute.

Toronto (22-1-0) clinched the second-tier Betfred Championship regular-season title last time out with a 24-19 win at Widnes on July 21.

The Wolfpack's lone loss this season came March 9, a 46-16 setback at Toulouse Olympique. Toronto has beaten Toulouse twice since that defeat.

Bradford (12-10-1) came into the day seventh in the standings, chasing the fifth and last playoff spot in the Championship.

"I though the first half we were magnificent," said Bradford coach John Kear. "But we got caught the first 10 minutes of the second half."

Leutele opened the scoring in the sixth minute after a set highlighted by a fine Andy Ackers run.

But Bradford pulled ahead 6-4 in the 15th minute on a line break by Hitchcox. The former Castlelford winger raced 70 metres from a scrum deep in his own end.

In the 25th, Webster accelerated past two defenders to score after the Toronto defence was carved open by Lilley and Brandon Pickersgill. Keyes' conversion made it 12-4.

Toronto's Kay crashed over the line in the 28th minute but fumbled the ball on a hit before he could touch it down.

Bradford took advantage a minute later after a fine run by Matty Wildie moving the Bulls deep into Wolfpack territory. Crossley eventually bulled his way over, with two Toronto players on his back, to increase the lead to 18-4.

Late in the half, Ethan Ryan prevented a Toronto try by getting to a Hakim Miloudi kick first in front of the posts.

The tide turned in the second half.

The Wolfpack cut the deficit to 18-10 two minutes in after Bradford failed to deal with a high kick from Jon Wilkin. Toronto got the ball back and Leutele scored three passes later.

Rawsthorne touched down after swerving run by Ackers to make it 18-14 in the 45th minute. Kay kept the scoreboard ticking over in the 52nd minute after a prolonged Toronto attack with Miloudi's conversion giving the Wolfpack a 20-18 lead.

Miloudi, who started at fullback with regular starter Gareth O'Brien watching from the bench, upped to the lead to 21-18 with a 60th-minute drop goal.

Toronto was without the suspended Darcy Lussick and injured Matty Russell. Captain Josh McCrone was rested.

Toronto won 36-16 when the two teams met May 4 at Lamport Stadium.

Toronto, which hosts the York City Knights next Saturday, has four regular-season games remaining. Having already secured the League Leaders' Shield as regular-season champion, it gets a bye into the promotion playoff semifinals.

Toronto, which began play in 2017 in the third-tier League 1, fell one win short of earning promotion to the top-tier Super League last season.