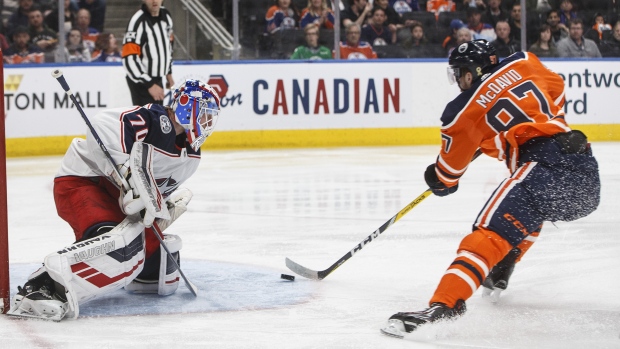 Connor McDavid had a goal and an assist and Leon Draisaitl had three assists as the Oilers emerged with a 4-1 victory over the Columbus Blue Jackets on Thursday. The win keeps Edmonton within five points of the Colorado Avalanche for the Western Conference's second wild-card berth,

Kyle Brodziak and Zack Kassian also scored as Edmonton (33-34-7) snapped a two-game losing skid and moved to five points back of a wild-card playoff spot.

"We're trying to climb back in it and we just have to take it game by game and try to collect as many points as we can on this homestand and the rest of the games and see where we stand," said Draisaitl.

David Savard responded for the Blue Jackets (40-30-4), who have lost three in a row.

Columbus's loss coupled with Montreal's 4-0 shutout of the New York Islanders earlier in the day put the Canadiens into the Eastern Conference's second wild card spot, one point ahead of the Blue Jackets.

"Now we are out of a spot and we have to chase it down now. We have some big games coming up and there is a lot of time left, but we need to make good on it," said Columbus forward Matt Duchene. "It has to come ASAP. We don't have any time to mess around."

Blue Jackets head coach John Tortorella said the time for talk is over.

"We just have to have some sort of urgency to try and get back into this, or we have no chance," he said. "I just don't think we understand the level that we need to play at right now."

Oilers CEO Bob Nicholson took some heat after comments he made at a season ticket holder's breakfast earlier Thursday. Nicholson seemed to blame forward Tobias Rieder's lack of production as a major factor in Edmonton's record, adding he would not be re-signed.

Rieder has no goals in 60 games this season. Later in the day Nicholson reportedly said he "stepped out of bounds."

There was no scoring in a rather sedate first period with Columbus putting four shots on Edmonton goalie Mikko Koskinen and the Oilers only getting two shots on Jackets starter Joonas Korpisalo.

Savard finally broke the deadlock for Columbus with 8:25 remaining in the second period when he deflected a Markus Nutivaara shot past Koskinen.

Edmonton responded less than two minutes later when Brodziak picked the corner after a set-up from Joseph Gambardella, who picked up his first NHL point.

McDavid set up Kassian 45 seconds into the third period to give Edmonton its first lead. Kassian tied a career high with 14 goals on the season.

Edmonton made it 3-1 when a McDavid shot went off the post and then bounced off of Korpisalo's back and in for his 37th of the season, putting him one point back of tying his career season high point total of 108.

Nugent-Hopkins put the game away with a late power-play goal on the only man advantage either team had on the night.

The Oilers are back at it on Saturday when they host the Ottawa Senators. The Blue Jackets are off until Sunday, when they are in Vancouver to face the Canucks.

Notes: It was the second and final meeting between the two teams this season, with Edmonton winning the previous encounter 4-0 on March 2… Blue Jackets goalie Sergei Bobrovsky was out due to an undisclosed injury. Keith Kinkaid dressed as the backup.