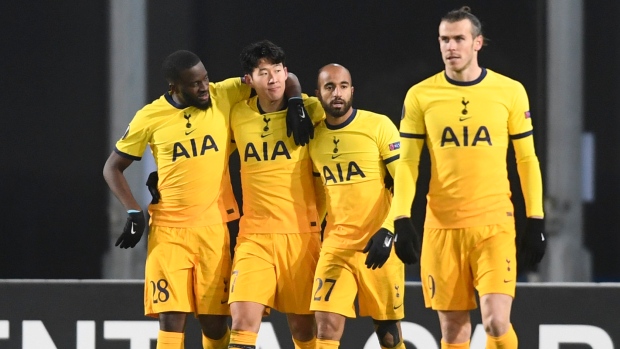 AC Milan came from two goals down to beat Celtic 4-2 on Thursday and qualify for the Europa League's knockout stage, while Tottenham advanced despite giving up a late equalizer.

Gareth Bale scored his first Europa League goal since returning to Tottenham from Real Madrid in the London club's 3-3 draw at Austria's LASK, which was enough to advance from Group J.

Another 12 teams made it through as Braga, Lille, Villarreal, Royal Antwerp, Dinamo Zagreb, Red Star Belgrade, Leverkusen, Slavia Prague, Rangers, Benfica, Granada and PSV Eindhoven all advanced with a game to spare.

Fans returned to a European football game in England for the first time since March when Arsenal hosted Rapid Vienna.

Arsenal hasn’t won a Premier League game since Nov. 1 but is the last team to keep a perfect record in Europe’s second-tier competitions after a 4-1 victory.

Celtic used an early scoring burst to take a 2-0 lead at San Siro but Milan came back almost immediately with two goals in two minutes.

Tom Rogic capitalized on a mistake by Rade Krunic to fire home the opening goal in the seventh minute after Celtic’s first attacking move.

Seven minutes later, Odsonne Édouard chipped the ball over Milan goalkeeper Gianluigi Donnarumma to stun the hosts again in front of the watching Zlatan Ibrahimovic in the stands.

Hakan Çalhanoglu started Milan’s comeback with a perfectly executed free kick 10 minutes later and the equalizer came shortly after with Samuel Castillejo hitting the roof of the net.

The Norwegian set up substituite Brahim Díaz to finish the scoring.

Burak Yilmaz came off the bench to score twice for Lille in a 2-1 comeback win over 10-man Sparta Prague that secured a place in the round of 32.

Lille leads Group H on 11 points, one point ahead of Milan. Sparta has six and Celtic one.

Tottenham needed just a point to advance but went 1-0 down in the first half through Peter Michorl’s strike from 25 metres (yards). Bale got the equalizer by sending goalkeeper Alexander Schlager the wrong way from the penalty spot and the Premier League leader took the lead after Tanguy Ndombélé set up Son Heung-­min for the second early in the second half.

LASK came back twice, though, first through Johannes Eggestein and then — after Dele Alli had netted another penalty for Spurs — with Mamoudou Karamoko’s equalizer in stoppage time.

Royal Antwerp beat Ludogorets 3-1 at home to top Group J on 12 points, with Tottenham on 10.

Captain Alexandre Lacazette set the tone for Arsenal 10 minutes into the game, unleashing a swerving long-range shot with his right foot that sailed into the net.

Pablo Mari rose high to head in the second off a corner kick seven minutes later for his first goal for Arsenal.

Eddie Nketiah made it 3-0 before the interval, finishing a free-flowing move. Goalkeeper Richard Strebinger parried his initial shot but the forward was able to head home the rebound.

Kohya Kitagawa pulled one back for Rapid in the second before Emile Smith Rowe stretched the lead to three again. Ainsley Maitland­-Niles was fed by Nicolas Pépé on the left to cross for the substitute to score three minutes after coming on.

It gave the 2,000 fans who were allowed into the Emirates Stadium something to cheer about after poor play in the Premier League.

The club sold out the tickets within 20 minutes, having offered them to season-ticket holders on a first-come-first-served basis after coronavirus restrictions were eased in London. Arsenal has already qualified for the knockout phase with two games to spare.

Arsenal made it five wins from the first five games in a European competition for only the second time after the 2005-’06 season in the Champions League.

Vitor Tormena and Ricardo Esgaio scored in a two-minute span early in the first half to help Braga to a 4-2 win at AEK Athens and secure advancement.

Leicester, which was already through to the next round, lost 1-0 at Zorya Luhansk for its first defeat of the campaign but is tied with Braga atop Group G with 10 points.

A 1-0 away win at Sivasspor sent Villarreal through. The Spanish side leads Group I with 13 points. Maccabi Tel-Aviv, which drew 1-1 at Qarabag, has eight, two more than Sivasspor.

Dinamo Zagreb advanced with a 2-0 away victory at Feyenoord. It tops Group K on 11 points. Wolfsberg won 1-0 at CSKA Moscow to sit second on seven. Feyenoord has five and CSKA three points.

Red Star Belgrade's 0-0 draw against Hoffenheim was enough to follow the Bundesliga side into the next round from Group L. Hoffenheim has 13 points, three more than Red Star.

Already qualified Roma clinched top spot in Group A with a 3-1 victory over Young Boys. The Italian side has 13 points, leading the Swiss by six. Romania’s Cluj drew 0-0 with CSKA Sofia to sit third with five.

Despite having six players down with injuries, Bayer Leverkusen secured qualification with a 3-2 away win at Nice. The German team is joint top in Group C with Slavia Prague, which progressed with a 3-0 home victory over Hapoel Beer-Sheva.

Jan Vertonghen, Darwin Nuñez and Pizzi scored in a 3-0 home win for Benfica against Lech Poznan to put the Portuguese powerhouse into the next round. Rangers also went through with a 3-2 victory over Standard Liège. Benfica and Rangers are tied atop Group D with 11 points.

Spanish club Granada advanced despite a 1-0 home loss to PSV, a result which also put the Dutch team through. Granada has 10 points in Group E, one ahead of PSV. Omonoia is bottom with four despite beating PAOK 2-1 in the other group game.

Napoli drew 1-1 at Alkmaar to lead Group F with 10 points. Real Sociedad and Alkmaar are two points behind. Rijeka has one.