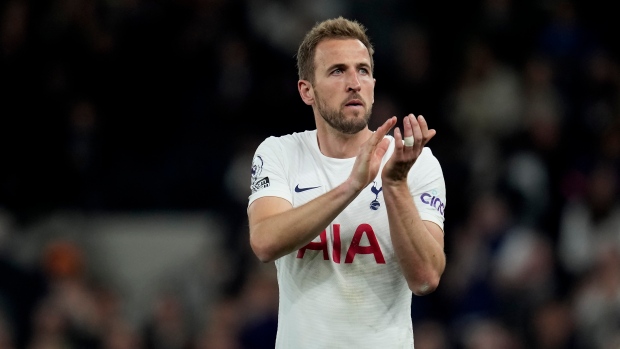 LONDON (AP) — Tottenham revived its hopes of beating Arsenal to the final Champions League qualification position by overwhelming its fierce north London rival in a 3-0 win in the Premier League on Thursday.

Harry Kane scored twice — including one from the penalty spot — and Son Heung-min added the other just after halftime to move Tottenham one point behind fourth-place Arsenal, which had center back Rob Holding sent off in the 33rd when the score was 1-0.

There are two games remaining for each team and fifth-place Tottenham’s finish to the season looks easier than Arsenal’s. While Spurs face two of the bottom four in Burnley and already-relegated Norwich, Arsenal must travel to Newcastle before a home game against a resurgent Everton.

“This type of game is not easy — when it’s a game you must win, it's not easy,” Tottenham manager Antonio Conte said. “We knew tonight, there had to be only one result. We had concentraton, and had the right calm and positive pressure.”

Arsenal was responsible for its own downfall in a way, with full back Cedric Soares barging into Son at the back post for the penalty that Kane rolled into the corner in the 22nd minute.

Holding, already booked for pulling back Son, then opted to stick out an elbow to block off the South Korea forward rather than track his run following Eric Dier’s ball over the top of the Arsenal defense.

Holding connected with the face of Son, who slumped to the ground, and was shown a second yellow card in the 33rd.

Arsenal manager Mikel Arteta refused to comment on either the penalty or the red card, but his anger was evident.

“If I say what I think, I'm suspended for six months,” Arteta said.

Arteta chose not to bring on a specialist defender to shore up the defense — center back Ben White, returning from injury, remained an unused substitute — and, within four minutes, Arsenal fell further behind.

Son swung over a corner from the right, Rodrigo Bentancur headed the ball toward goal, and Kane stooped to head home at the back post from barely a meter out.

Son moved one goal behind Liverpool’s Mohamed Salah in the race to be the league’s top scorer by curling home the third goal from inside the area in the 47th after Kane had been tackled just as he was about to shoot on the turn.

Son has 10 goals in his last eight league games and is on 21 for the campaign, his best yet for Spurs. He looked unhappy when he was substituted in the 72nd minute, denying him a chance to draw level with Salah, and was given a big hug by Conte after the final whistle.

A miserable evening for Arsenal was capped by defender Gabriel hobbling off with an apparent right hamstring injury. With Holding suspended and White maybe still not fully fit, Arteta’s central-defensive resources are being stretched just at the wrong time.

Manchester City and Liverpool are already sure of being in next season’s Champions League while third-place Chelsea is set to join them, sitting four points ahead of Arsenal and needing one win from its remaining games against Leicester and already-relegated Watford.

It means Arsenal and Tottenham look to be battling for the final one and it should go to the final day of the season.

“You lose the football match in the conditions that we lost it, it's painful,” Arteta said. “This game is history for us, now it's Newcastle. This game got out of our hands and we have to accept it.”