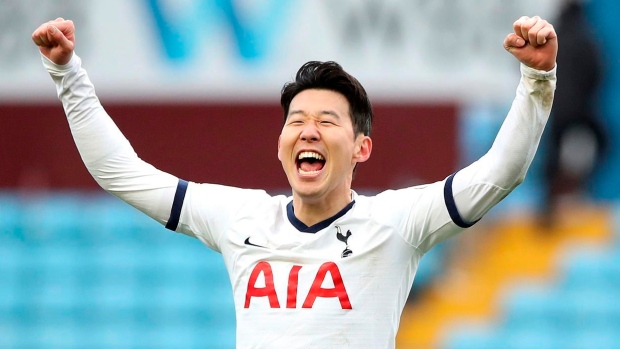 LONDON — Tottenham forward Son Heung-min could be out for the season because of a broken right arm, manager Jose Mourinho said Tuesday.

Son broke his right arm on Sunday in a Premier League win over Aston Villa, and Tottenham initially said the South Korea was expected to miss several weeks.

However, Mourinho was more pessimistic when assessing Son's recovery time.

Son was injured in a first-minute challenge with Villa's Ezri Konsa but still completed the 90 minutes and scored twice.

He will undergo surgery this week, Tottenham said

“Following surgery, our medical staff shall be reviewing management options for Son's rehabilitation with the player expected to be sidelined for a number of weeks,” the club said in a statement released hours before Mourinho's news conference.

The injury leaves Tottenham short up front, with first-choice striker Harry Kane also a long-term absentee with a hamstring injury.

Son has been deputizing as the main frontman since Kane's injury but with both players now missing, Lucas Moura or untested youngster Troy Parrott may be required to step in.