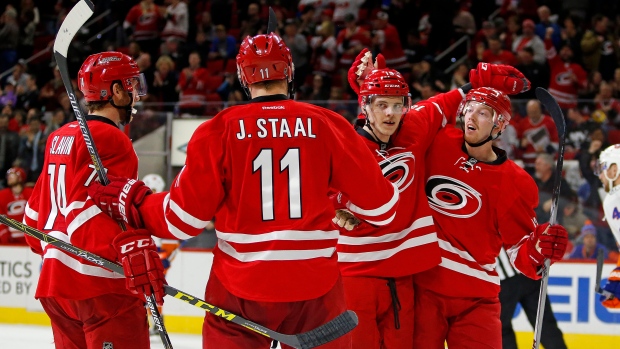 Just over nine thousand fans showed up to see the Carolina Hurricanes host the Arizona Coyotes in early December. Excitement, engagement and attendance was dipping around a club that's been absent from the playoffs since 2009.

A two-month surge is turning those tides and forcing some tough questions as the Hurricanes press for an unexpected berth in the post-season.

Last in the Eastern Conference at the end of November, Carolina has run up an impressive 17-8-6 mark over its last 31 games and is now only a few points back of a wild-card spot. The rise has surprised the Hurricanes's brass, and general manager Ron Francis had to push back his timeline for determining how the club will approach the Feb. 29 trade deadline.

"I've been saying this for a couple months, 'We'll get a clearer picture the next week, the next week'. It's still about as clear as mud," said Francis.

Carolina has thrived behind head coach Bill Peters and a roster mixed with youth and experience, especially on the back-end. The Hurricanes defence features 19-year-old Noah Hanifin, 21-year-old Brett Pesce and 21-year-old Jacob Slavin as well as vets like 35-year-old John-Michael Liles and 34-year-old Ron Hainsey.

The younger defenceman have played an especially significant role — averaging between 18-19 minutes a game — that the organization didn't expect when the season began. Francis figured the trio might all spend substantial time in the American Hockey League before joining the NHL club in the second half.

"I think our coaching staff has done a nice job with those young guys in getting them into situations where they have success and if they make a mistake they're right back out there and they play," Francis said.

Peters has made a positive impression in his second season behind the Carolina bench. Not only have the younger Hurricanes made strides under his watch, but the group as a whole is performing effectively, ranked amongst the top-10 in puck possession while yielding less than 27 shots per game, the second stingiest mark in the league.

The club felt Peters, who served as an assistant to Mike Babcock for three seasons in Detroit before replacing Kirk Muller, was the right person to change a culture that was perceived by fans as lacking intensity.

"He's been a real good coach for us," Francis said.

The Hurricanes have missed the playoffs in each of the past six seasons, something Francis will have to be mindful of as the deadline approaches. Decisions will need to be made with a roster that has a few interesting impending free agents who could entice playoff contenders, notably captain Eric Staal.

Carolina saw attendance hover around and sometimes below 10,000 people often enough in October and November, numbers which have crept back up as the team's play has improved.

Francis says he doesn't intend to stray from the patient rebuild he promised. Still, he could hang onto assets like Staal and pursue a long-awaited playoff berth, even if the odds are long. The community certainly could use it.

"Well I think when we took over the message was pretty clear," he said. "We wanted to build this thing right from the bottom up so that when we got to the playoffs we felt we would be a team that could compete year after year on a consistent basis.

"That hasn't changed. Our plan is to continue to build and try and get this right for the long-term. If you're asking me if I'm willing to give up assets or things that we think are important to our future to try and get in (the playoffs) this year then that's not something we're willing to do."