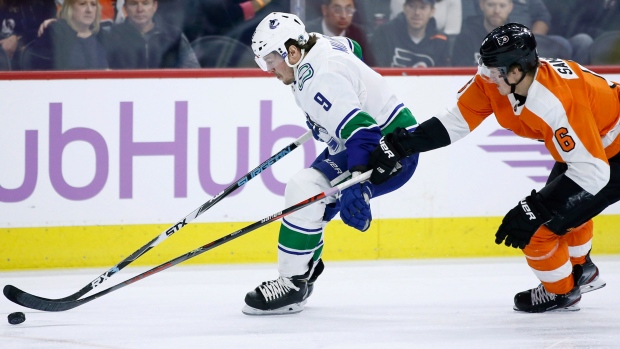 “Just tell him ‘AV’ says ‘You get it now’ and he’ll have a little smirk for you and he’ll say ‘I understand now,’ ” Vigneault said. “I had some tough love with J.T. and it took him a little bit of time to figure it out.

“But I know he’s figured it out now.”

It hasn’t taken Vancouver as much time to figure out exactly what GM Jim Benning saw when he made a widely panned trade for Miller last June, sending a first-round pick to Tampa Bay for a player the cap-strapped Lightning couldn’t afford to keep.

Safe to say, Benning is pleased with the early return on Miller. He’s exceeded expectations with 24 points (10 goals) in 25 games, scoring again for the third place Canucks (12-9-4) on Monday night against Vigneault’s Flyers.

“Part of the job is that I leave emotion out of it,” Benning said via phone on Monday. “When we did the deal, the timing was right. I knew we’d be adding another top-six forward. I think J.T. had a really strong year last year, but he played on such a good team in Tampa that he was behind some of their other forwards. He had a real chance to come in and be a skill guy for us, and he’s changed the dynamic of our team.”

For Miller, who is still just 26, it was the second time he’d been traded in a span of 16 months - including his original deal with Ryan McDonagh from the Rangers to the Bolts on Feb. 26, 2018.

That can be a shock to the system of some players, especially one that was barely finished the first year of a five-year, $26.3 million contract. But Benning impressed upon Miller the opportunity that he’d get with the Canucks in his initial conversation.

“I told him that he’s either going to play with [Brock] Boeser and ‘Petey’ [Elias Pettersson] or he’s going to play with Bo [Horvat],” Benning said. “It doesn’t matter which one, those young guys are great players. He’s taken the bull by the horns since then.”

They are opportunities that Miller probably wouldn’t have gotten in Tampa Bay, to play on the top power play unit, to be out on the ice in key situations late in games.

Similarly, that opportunity has translated into an organic leadership role in Vancouver. Just as Miller was always one of the younger guys in New York or Tampa Bay, he is one of the veterans on a young Vancouver team.

“This has been the first year that I felt an obligation, that I want to be a leader,” Miller said Monday. “I’m a vocal guy, sometimes being hard on the young guys. I think that’s part of the process. My whole career I’ve been fortunate enough to have really good leadership around me and I’ve learned a lot from them, what it takes.”

That leadership step that Miller has taken has been a pleasant development for Benning.

“We wanted him to help make our team’s competitive environment, someone who was going to work with our players and show them what it takes to win,” Benning said. “He does a lot of the little things, like getting the puck and taking hits to make plays, and making sure the puck gets to the net. That rubs off on our young guys.”

The GM with scouting in his veins was willing to give up a first-round pick to have Miller embody that message. Benning believed that was one way for the Canucks to take a step forward.

“Well, for one, it’s lottery protected,” Benning said. “So if we missed the playoffs, the pick is still ours. And if we make the playoffs, we’d be picking 16 to 31 and he’d be helping us get there.”

In a weird way, it’s all come full circle for the Canucks: Vigneault, the winningest coach in franchise history, teaching Miller with a little tough love. The lesson may have happened in New York, but the Canucks are reaping the reward.

“I try to realize what I am doing, what makes me a good player, and try not to stray too far from that,” Miller said. “I think so far, consistent-wise – not even production or anything like that – I’m playing my game, competing good and being accountable all over the ice, I think it’s been a good start.”

Yes, Miller gets it now. He just wasn’t necessarily expecting the reminder to come from his old coach, of all people, so many years after the fact.

“We had a rocky history, but I think he’s a big reason why I’m trying to become the player I am now,” Miller said. “I was a young kid that didn’t have my crap together when I was 20 and he helped me with that.”