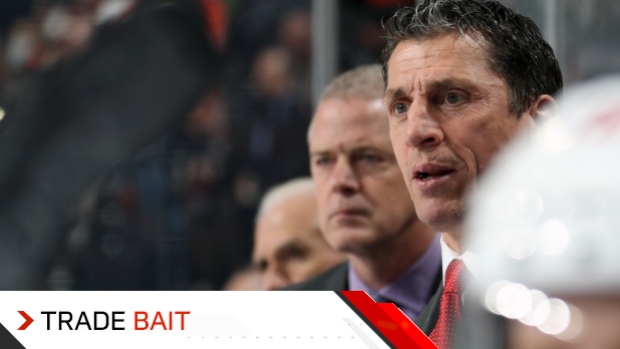 Lost in the frenzied celebration of emergency backup goaltender David Ayres and his see-it-to-believe-it win over the Toronto Maple Leafs on Saturday night was the impact of it all on TradeCentre.

Maybe Jake Gardiner said it best: “I mean, we lose two goalies and one of our best defencemen and still can win the game? That’s pretty cool.”

Even before Saturday, Carolina was already on the prowl for a defenceman to replace Dougie Hamilton, who is out for the rest of the season with a fractured fibula, and some goaltending depth.

You’d have to think those missions have intensified now in a year where the Hurricanes can’t afford to miss out on continuing the momentum in their market after last year’s run to the Eastern Conference final.

Carolina’s top priority at the moment is on defence.

Right now, GM Don Waddell has let teams know - the ones that began generously offering a life raft on Sunday - that he is prepared to recall both AHL goaltenders Alex Nedeljkovic and Anton Forsberg for the time being.

The Canes don’t know yet how much time Mrazek will miss. He left Saturday’s game after being run over by Kyle Clifford, paving the way for Ayres to make history as the oldest netminder ever to win his NHL debut. Forsberg played 35 games for the Chicago Blackhawks two seasons ago, so the Hurricanes don’t feel absolutely forced to make a move if Mrazek won’t be on the shelf long-term.

Defence is a different story.

Carolina has been connected to a number of different options, from Sami Vatanen to Tyson Barrie and beyond. The complicating factor is the belief that owner Tom Dundon is not a fan of trading for rental players, which limits the field and raises the price on an acquisition.

The Canes have plenty of trade chips to get the defenceman they’re seeking. They’re likely willing to move pending UFA centre Erik Haula - who scored 29 goals and 55 points two seasons ago in Vegas - and a first-round pick.

The Hurricanes are the only buyer with an extra first-round pick in their arsenal, acquired from the Maple Leafs last June to facilitate the Patrick Marleau buyout.

At this point, it’s difficult to imagine the Hurricanes hanging on to one of those picks, given their needs.

That’s why it’s up to No. 3 on TSN Hockey’s latest Trade Bait board, which always seeks to blend a player or asset’s prominence with its likelihood of a trade: