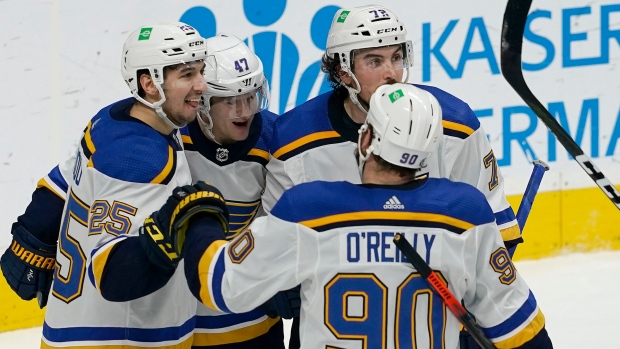 Three quick hits with three days to go until TradeCentre:

1. The St. Louis Blues have emerged as one of the real wild cards ahead of Monday's trade deadline.

Goaltender Jordan Binnington made the bold proclamation on Wednesday night: “We’re coming.” The 2019 Stanley Cup champion Blues are right in the mix, three points back of the Arizona Coyotes with one game in hand for the final playoff spot in the West Division.

Once healthy, they will be a tough out – if they can get in.

Is it possible that Blues GM Doug Armstrong will attempt to both buy and sell at the deadline?

Armstrong has a track record of moving his pending free agents – Paul Stastny in 2018, Kevin Shattenkirk in 2017 – when his team has danced on the bubble.

One of the NHL’s pure scorers, Mike Hoffman, is No. 3 on the latest TSN Trade Bait board. Armstrong has also spoken to teams about forward Tyler Bozak. We have no indication at this point that Jaden Schwartz is available.

But here’s where it gets interesting: The Blues are among the teams believed to have contacted the Buffalo Sabres in recent days with interest in Taylor Hall.

Swapping out Hoffman for Hall would not require a third-party financier to broker cap space if Buffalo retains half of Hall’s salary, plus it would certainly not damage – and might even enhance – the Blues’ playoff chances, while giving Armstrong and St. Louis a window into a potential future longer-term fit with Hall.

For the first time, Kings GM Rob Blake has engaged with teams on the prospect of moving pending free-agent winger Alex Iafallo this week as a contract extension has not materialized.

Because of that, and his potential impact and interest, Iafallo has jumped up to No. 5 on the TSN Trade Bait board.

Iafallo, 27, is on pace for 20 goals and 51 points over a full 82 games with the Kings this year, almost exactly what Craig Button predicted with the Button Bump as one of TSN’s Top 10 Breakout Stars at the beginning of the season.

The Kings and Iafallo’s camp will continue to grind away on an extension over the weekend, so this one could go either way.

3. Stars getting calls on UFAs

Keep an eye on the Dallas Stars. GM Jim Nill has given his 2020 Stanley Cup finalist team every opportunity to stay in the chase in what has been a very difficult season.

Ideally, that would still be the case after Monday’s 3 p.m. E.T. deadline. Tyler Seguin and Ben Bishop are still a couple weeks away from returning, so they might be Dallas’ deadline additions.

But the math is hazy. The Stars sit seven points back of Nashville with three games in hand, and they’ve never really looked like a team poised to make a run, enjoying only one two-game winning streak since late January.

That means the Stars may have to consider moving one or more of their four pending free agents: Jamie Oleksiak, Andrew Cogliano, Blake Comeau and Mark Pysyk.

Dallas has received varying displays of interest in all four. Oleksiak, a 6-foot-7 defenceman, would be by far the most coveted, which is why he is up to No. 9 on the Trade Bait board.

There is certainly no guarantee Nill moves his free agents. But if the price is right, he may have no choice in this upside-down season filled with a COVID-19 shutdown and a full-fledged weather emergency.

Three players are off the board: Vancouver re-signed Tanner Pearson, plus injuries have limited Anaheim’s Rickard Rakell and Detroit’s Bobby Ryan.