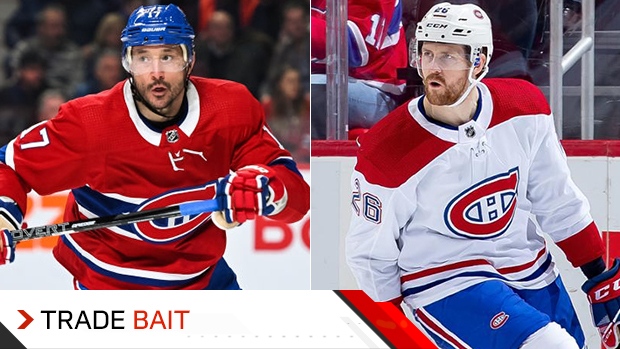 This may be the bye week for half the NHL’s teams, but it’s a busy one for NHL front offices.

TradeCentre is less than five weeks away.

It’s time to take inventory, conduct scouting meetings, and formulate a game plan for how to add for the stretch run or stockpile for the future.

Some of those exact conversations are taking place this week within the Montreal Canadiens, one of the more intriguing teams heading up to Deadline Day on Feb. 24.

It’s difficult to envision the Habs - who entered their bye week 13th in the East in points percentage (.510) - entertaining the idea of bulking up to jockey for a run at a playoff spot, but at the same time, selling off pieces isn’t exactly in the DNA of Montreal.

Regardless, the Canadiens hold two provoking pieces on the latest TSN Trade Bait Board.

One is Ilya Kovalchuk (No. 3), the former Rocket Richard Trophy winner who has found an unlikely renaissance in La Belle Province, and the other is key defensive cog Jeff Petry (No. 20).

On New Year’s Day, Kovalchuk was on the scrap heap - available to all 30 other teams after walking away from $4.25 million and agreeing to terminate his contract with the Los Angeles Kings.

Now, after signing a pro-rated, one-year contract for the league minimum $700,000 on Jan. 3, Kovalchuk should generate interest as an asset GM Marc Bergevin can flip for a draft pick. Kovalchuk, 36, has collected eight points (four goals) in eight games with the Habs.

The more difficult question the Canadiens will attempt to answer over the next 34 days will be: How do we manage Petry?

Teams will be phoning Bergevin to inquire about the defenceman. And given what the Toronto Maple Leafs paid for Jake Muzzin (a first-round pick plus prospects Sean Durzi and Carl Grundstrom) last January, the Habs might have to think long and hard if they can get a similar return.

The expectation is that teams will have to pay a premium to pry Petry loose. The Canadiens will have a difficult time trying to replace his 23 minutes per night and point production on the blue line next season as they regroup and try to take another run next year with a group one year older.

The clock is ticking on that decision.

Here is the latest TSN Trade Bait board, which always seeks to blend a player’s prominence with his likelihood of a trade: