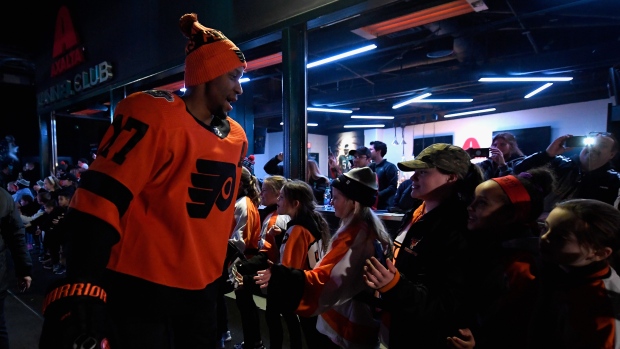 Claude Giroux was handed the Philadelphia Flyers’ customary player-of-the-game helmet after his shake-and-bake overtime winner, but he said he couldn’t accept it.

He passed it to Jake Voracek, who scored the goal with 19.7 seconds left that forced overtime in front of 69,602 rain-soaked fans in the 2019 Stadium Series.

But on that night, even after a spine-tingling comeback against the rival Penguins, Voracek and everyone in the room recognized what loomed before the trade deadline.

“In this situation, we don’t know what’s going to happen Monday,” Voracek said in the home of the Eagles, with cameras rolling. “But I’ve got to give it to one of my best friends. He deserves it for all of the years he’s been here. Whatever happens, Simmy, we love you. Hopefully you’re going to stay around. This one’s for you, buddy.”

The two shared an emotional hug.

“That was an unbelievable game, boys,” Simmonds told the team. “It’s been an honour and a pleasure. I hope I’m still here, but either way boys, keep making this push. Keep our hopes alive and our dreams alive.”

"Keep making this push and keep our hopes alive and our dreams alive."

After a thrilling #StadiumSeries win on Saturday night, the #Flyers locker room had an emotional Helmet hand-off. pic.twitter.com/ZT9kOTwinh

Simmonds, 30, is a pending unrestricted free agent - a warrior who averaged 29 goals over each of the last five seasons - and is ranked No. 2 on the latest TSN Trade Bait board for a team looking to add muscle and a heavy winger for the playoff push.

Incoming GM Chuck Fletcher has given the Flyers every opportunity to claw back into the race with Simmonds. They sat in 31st place on Jan. 9, but an eight-game winning streak brought them within five points of a playoff spot. The problem is they have gotten no closer.

They are 13-3-1 in their last 17 games but still sit seven points back of the final spot now and do not hold any tiebreakers. It’s an unrealistic summit to mount in the final quarter of the season.

Two things could keep Simmonds in Philadelphia: a last-minute tug at the heartstrings by Fletcher to forego free agency with a team-friendly deal, or trade offers that only net secondary assets in return.

In that case, Fletcher has vowed to keep Simmonds for the final push.

But the belief is that Simmonds, even with a less productive 16-goal season and recent injury history, could still bring back a conditional first-round pick and a prospect.

The Tampa Bay Lightning were one of the first teams to contact Fletcher about Simmonds in January. He would add bite to a stacked Lightning team that many believe got pushed around by the heavier Capitals in last year’s Eastern Conference Final.

They are one of a handful of teams to express significant interest. Simmonds holds a 12-team, no-trade clause and the Flyers want to make sure one of their all-time fan favourites finds a comfortable landing spot after eight years of exemplary service.

Simmonds said he took time to soak it all in. If Saturday was the way it ended after 584 games, there may have been no sweeter send-off.

“Yeah, I looked around,” Simmonds told reporters. “It’s not often you get to play in front of 70,000 people. Obviously, you don’t know what my future holds here. It was nice to stand out there and get that win and have all those cheers.”