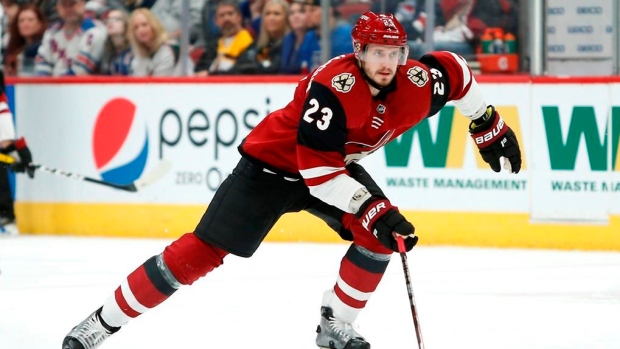 The message was simple yet still jaw-dropping. When asked to size up the trade market as a whole, this is how one NHL general manager framed it on Wednesday:

“The number of franchise-changing players available or being talked about each day is astonishing,” the GM said. “It’s just that no one has any room for them.”

Welcome to the 2020 version of the NHL’s off-season with a frozen $81.5 million salary cap.

There are now more than 50 names in play on the latest TSN Trade Bait board.

Each team has an incredible number of balls in the air between pushing to clear cap space, managing internal budgets, being unable to afford restricted free agents and juggling the free agent market, along with next week’s draft – oh, and all of that with one eye on the 2021 Expansion Draft.

Take the Edmonton Oilers, for instance. Here are a number of the things on GM Ken Holland’s plate at the moment:

- The Oilers are attempting to find a taker for either restricted free agent Andreas Athanasiou and/or Matt Benning, both of whom will likely not receive a qualifying offer due to lack of cap space.

- Defenceman Oscar Klefbom’s lingering shoulder injury looms large. Sources indicate Klefbom is seeking opinions on how to move forward with the injury; if it requires surgery, he may be on the shelf long-term.

- If Klefbom is out for a long stretch, it would create opportunity on the salary cap by potentially using his $4.17 as a long-term injury exception to acquire a replacement. The Oilers are believed to have had preliminary discussions on acquiring defenceman Oliver Ekman-Larsson, the new No. 1 on the Trade Bait board, from Arizona. But there is a financial component to the potential transaction that would need to involve Arizona retaining a portion of Ekman-Larsson's salary, which the Coyotes have not been willing to budge on. Top-end defensive prospect Evan Bouchard (No. 46) and the Oilers' first-round pick could be involved in a deal.

- The Oilers are believed to have made recent progress with Ryan Nugent-Hopkins’ camp on a long-term extension. Nugent-Hopkins, 27, is entering the final year of his deal at $6 million. There may actually be some urgency to getting a deal done sooner rather than later, or at the very least knowing in concrete terms whether there is a deal to be had.

- If Nugent-Hopkins is not in the fold, sources suggest the Oilers are interested in targeting Taylor Hall if he were to hit the free agent market. No team since the 1947-48 Montreal Canadiens has featured three Hart Trophy-winning forwards, which would be possible if Hall is back in Oil Country alongside Leon Draisaitl and Connor McDavid.

- Then there is the goalie market. Holland is set on acquiring a starter. The Oil have already been linked to Trade Bait in Matt Murray (No. 4), Darcy Kuemper (No. 21) and Petr Mrazek. Free agency is just nine days away and there is a slew of starters available, with many wondering whether the Oilers would take a run at Jacob Markstrom if he makes it to market.

- As reported on Wednesday, the Oilers are also in discussion to bring Jesse Puljujarvi back into the fold. Puljujarvi, 22, had 53 points in 56 games last season in Finland’s Liiga and the Oilers hold his rights until his 27th birthday. He is likely to remain in Europe until next season, but if/when a deal is worked out, it is likely to be a one-year contract worth $1.2 to $1.5 million.

- Adding Puljujarvi back to the mix would only add to Edmonton’s glut at right wing. Sources say the Oilers engaged the Boston Bruins on a left/right wing swap, Alex Chiasson for Anders Bjork. (Assistant GM Keith Gretzky drafted Bjork in Boston.) We’ll see where that goes, but the Oilers are pursuing a number of similar left/right swaps with other teams. There were rumours about the Oilers’ interest in bringing Bruins RFA Jake DeBrusk home to Edmonton. DeBrusk is No. 7 on the Trade Bait board, but given the Oilers’ cap constraints plus acquisition cost, he is likely too expensive.

That is just one glimpse into one team. Multiply that action by 30 and it’s easy to see why this could be one of the most fluid off-seasons in recent memory.

- Vezina Trophy runner-up Tuukka Rask debuts on the board at No. 10. Many were wondering if there would be fallout from Rask’s decision to leave the bubble for family reasons, a decision that was certainly supported by teammates. But multiple sources indicate that Bruins GM Don Sweeney has initiated conversations with teams about Rask’s market value over the last number of weeks.

- With Rask, both of the Blue Jackets’ netminders, Devan Dubnyk, Martin Jones and even Sergei Bobrovsky hitting the board, it might be easier to list the goaltenders who are not moving this fall. It’s not long: Carey Price, Connor Hellebuyck, Andrei Vasilevskiy, John Gibson, Carter Hart, Jordan Binnington, Ilya Sorokin, Igor Shesterkin, and Ilya Samsonov.

- Speaking of Bobrovsky, is that the NHL’s most unmovable contract?

- The Lightning’s three Stanley Cup champions on the board (Yanni Gourde, Tyler Johnson and Alex Killorn) are representative of the cap challenge facing GM Julien BriseBois.

- With limited free agent centres available, the Predators believed to be exploring opportunities to move any one of theirs who can play it: Ryan Johansen, Matt Duchene, Kyle Turris or Nick Bonino. No Nashville forward has any no-trade protection.