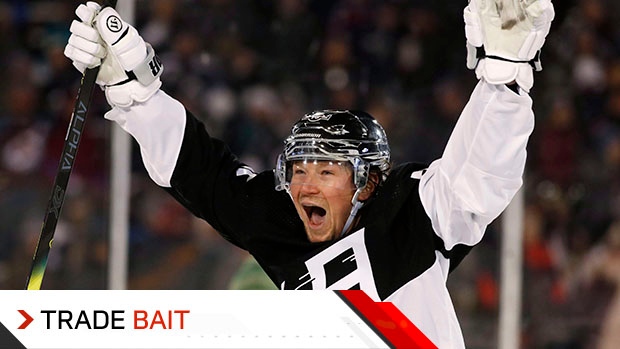 Toffoli, 27, notched his 16th, 17th and 18th goals of the season against the Avalanche at the U.S. Air Force Academy. He is nearly a sure bet to be dealt by the Los Angeles Kings between now and 3 p.m. E.T. on Feb. 24, which is why he’s up to No. 6 on the latest TSN Trade Bait Board.

Toffoli has put up comparable numbers (18 goals and 34 points) to Kreider’s 23 goals and 42 points for the Rangers, and the two wingers have nearly identical salary cap hits (Toffoli $4.6 million, Kreider $4.625 million).

But Kreider, 28, is expected to fetch a first-round pick and prospect, while Toffoli is believed to be in the second-round pick range.

“Every team is looking to get bigger, stronger and faster and Kreider checks all of those boxes,” one Eastern Conference executive said Monday. “Toffoli doesn’t have that speed and power element. He doesn’t play with pace.”

That executive, whose team isn’t in trade talks for Toffoli, said he could see “a package that looks like a second- and a fourth-round pick that might become a third with a condition” or “a second-round pick and a team’s fourth- or fifth-best prospect.”

Is Palmieri next to go in New Jersey?

After trading captain Andy Greene to the Islanders and Blake Coleman and his bargain contract to Tampa, interim Devils GM Tom Fitzgerald put most of the rest of his roster on notice.

“My plan, if I am to continue at this position, is to grow around Jack [Hughes] and Nico [Hischier] and that age frame, and have a group of kids around that same type of age group to grow together,” Fitzgerald told reporters. “That’s simple.”

Fitzgerald’s phone has been ringing on both players, which is why Palmieri is joining the board at No. 9 and Vatanen is up to No. 2. Vatanen appears to be the top rental defenceman on the market in terms of potential return.

The only question on Palmieri is whether the local New Jersey product is moved before Feb. 24 or in a deal that waits until June, when more teams would be interested in perennial 50-point player’s services.

There doesn't appear to be a market for P.K. Subban at the moment, and Devils mainstay Travis Zajac has reportedly declined to waive his no-trade clause.

Contract negotiations between Kreider and the Rangers have reportedly failed to produce meaningful progress on an extension. The clock is ticking.

The Rangers have told teams that they’re willing to listen on all of their pending free agents, both restricted and unrestricted, which is why Anthony DeAngelo and Pavel Buchnevich have been on the board.

They will continue to listen. But if Kreider is indeed on the move, which appears likely, there is less of an urgency to move either DeAngelo or Buchnevich now since the Rangers will now have a bit more cap breathing room. That’s why both players took a tumble on the board.

Here are 50 names believed to be in play on TSN Hockey’s latest Trade Bait board, which always seeks to blend a player’s prominence with his likelihood of moving: