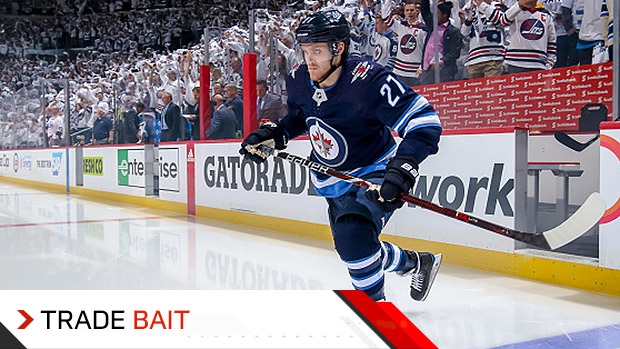 LAS VEGAS - Buckle up. The busiest week on the NHL calendar has just begun.

The Winnipeg Jets and San Jose Sharks shook up the market for defencemen on Monday, when the rights to Jacob Trouba were dealt by the Jets to the New York Rangers, while the Sharks re-upped Erik Karlsson to a massive $92 million extension.

Both of those general managers believe more is to come.

“There’s been more conversation and communication between GMs in the last month than maybe ever since I’ve been a GM,” said Sharks GM Doug Wilson, on the job since 2003.

“This is probably an unprecedented time of communication between the general managers,” Jets GM Kevin Cheveldayoff said.

Trouba was set to be the next No. 1 on TSN’s Trade Bait board. With Trouba off the board, and Phil Kessel in limbo in Pittsburgh, Maple Leafs defenceman Nikita Zaitsev is the next man up.

Zaitsev, 27, requested a trade from Toronto and GM Kyle Dubas acknowledged earlier this month the team is working toward satisfying it.

Zaitsev might not be the sexy name at No. 1. But even with five years remaining on his deal at $4.5 million – and a limited no-trade clause set to kick in on July 1 – there has not been a shortage of teams calling about the Russian-born defenceman who burst onto the scene in 2016-17 with a 36-point campaign. Cost certainty is a valuable commodity in the salary cap world.

The Vancouver Canucks are among the teams who have expressed interest in Zaitsev.

Jim Benning and the Canucks are believed to be involved in anything and everything to try and improve their defence, particularly with Alex Edler expected to move on in free agency. From Zaitsev to Trouba to potentially Tyler Myers in free agency, they are hoping to make a splash – even if it costs them their first-round pick (10th overall) to do it in front of their fans on Friday night as draft hosts.

The same could be said of the Jets. Trading Trouba was just the first step in a series of moves – one of which may be re-signing Myers. Acquiring restricted free agent Neal Pionk and a first-round pick from the Rangers should help provide some cost certainty on the backend in place of Trouba.

“We have lots of moving parts, or balls in the air,” Cheveldayoff said.

Winger Nikolaj Ehlers (No. 5) is one of 10 new names on the board. The belief is the Jets have offered Ehlers to the Carolina Hurricanes in exchange for one of their right-shooting defencemen. Ehlers, 23, is coming off a down year and entering the second season of a seven-year, $42 million deal. The three-time 20-goal scorer hasn’t netted a single goal in 21 career playoff contests.

The Jets also explored packaging Trouba with Mathieu Perreault (No. 22) in a deal to unload the last two years remaining on Perreault's deal. Lots of difficult decisions are on the horizon with the Jets needing to re-sign Kyle Connor and Patrik Laine, while re-shaping the blue line and trying to keep Ben Chiarot.

“There’s no question we have a challenging summer ahead of us,” Cheveldayoff said. “There are realities in a hard [salary] cap world. This was a necessary first step for us to take.”