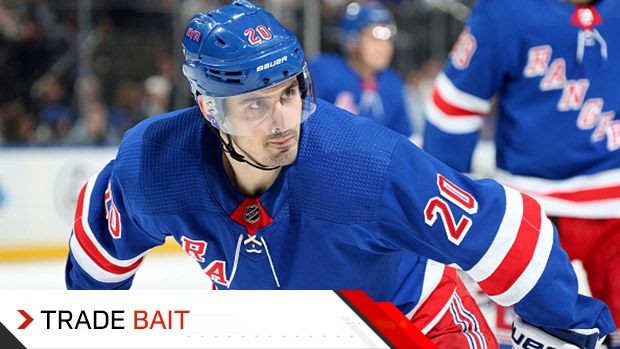 VANCOUVER - What a week for the New York Rangers.

GM Jeff Gorton vaulted the Broadway Blueshirts back into the playoff picture by acquiring defenceman Jacob Trouba from the Winnipeg Jets on Monday. On Friday night, the Rangers can add Finnish forward Kaapo Kakko at No. 2 overall in the NHL Draft.

Then the window opens on Sunday to potentially woo pending unrestricted free agent Artemi Panarin to the Big Apple.

That might not be all Gorton has in mind.

The Rangers are believed to be involved in multiple discussions to improve their club, with the potential to move Chris Kreider, Jimmy Vesey, Vladislav Namestnikov, Kevin Shattenkirk and/or Pavel Buchnevich over the next couple days.

Vesey would be the most likely to go, which is why he debuts at No. 7 on the latest TSN Trade Bait board.

Shattenkirk has been on the board all spring. It’s no secret the Rangers have sought a trade partner for the offensive-minded blueliner, and now are reportedly mulling over a buyout in the absence of one.

Kreider is further down the list at No. 20. He is entering the final year of his deal and much will depend on his initial salary demands and whether or not the Rangers believe they can work something out. His speed and skill would be a match for any club, or Kreider could certainly be a key cog in the Rangers’ rebuild.

For the last 18 months, it has been a rebuild on steroids for Gorton.

Since sending out a letter to season ticket holders acknowledging the rebuild and change in approach, Gorton has acquired 13 draft picks (including three additional first-rounders, three seconds and two thirds), plus high-end prospects Adam Fox and Libor Hajek, centre Ryan Strome and other prospects.

Gorton also won the No. 2 spot in this year’s draft lottery, flipped Kevin Hayes at the deadline and convinced two key Russian-born draft picks to come over to New York in forward Vitali Kravtsov and goaltender Igor Shesterkin.

Oh, and the Rangers will have nearly $20 million to spend this summer.

In other words, keep an eye on Gorton and the Rangers. They have a lot on the go.

Kreider and Vesey are two of five new names on TSN’s newest Trade Bait board. Here is the full Top 40, which always seeks to blend a player’s prominence with his likelihood of a trade: