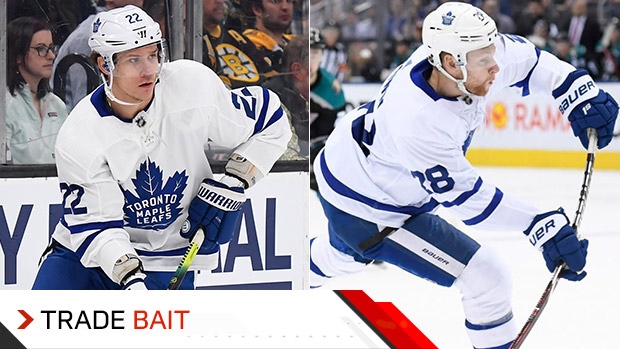 With the biggest ticket item still to solve, the Toronto Maple Leafs’ salary cap picture came into clearer focus over the weekend.

With wingers Andreas Johnsson ($3.4 million) and Kasperi Kapanen ($3.2 million) reportedly agreed to multi-year contracts extensions, and the salary cap upper limit set at $81.5 million, what is clear is the Leafs still have salary to shed.

It only takes simple back-of-the-napkin math.

Be an optimistic and pencil in Mitch Marner at a $10 million AAV moving forward. If Kapanen and Johnsson sign for those reported amounts, the Maple Leafs would still be north of $84 million – or $2.5 million over the limit. Place Nathan Horton's $5.3 million on LTIR and that brings the number below the cap, but the Leafs would still need to round out their roster.

(And that $10 million projection sounds optimistic at the moment.)

In other words, that’s why defenceman Nikita Zaitsev remains atop the latest TSN Trade Bait board, with winger Connor Brown following closely behind at No. 6. There is work to be done.

There’s more than one way to cut salary – as GM Kyle Dubas has indeed explored this summer – but one of the cleanest and most cost efficient revolves around granting Zaitsev’s trade request. The problem is, as Dubas has stated, that the Leafs also need a defenceman back in return to fill his void, plus a seventh (extra) man.

To make it happen, the Maple Leafs may need to add a sweetener with five years remaining on Zaitsev’s deal. It won’t be a first-round pick-type sweetener, like the one the Leafs were forced to part with in order to shed Patrick Marleau’s contract, but that deal underlined the value in cap flexibility for the Leafs moving forward. Another possibility, of course, is to trade centre Nazem Kadri (No. 17) – and there would be no shortage of interest there with his productivity in light of his cap hit.

Following last weekend’s Draft in Vancouver, the only new addition to the condensed Trade Bait board is Islanders project Josh Ho-Sang. Multiple names fell off the board now absent of a pressure point like Draft weekend when so many names are in play.

Pending free agent Artemi Panarin was one of the players dropped from the board because now that we’ve reached the interview period, the likelihood of a potential sign and trade has diminished.

Other deals became more likely. Take the Vegas Golden Knights, who find themselves in a position not all that dissimilar to Toronto. They have already exceeded the salary cap, well into the available 10 per cent summer cushion.

Vegas made the first step in solving some of those woes by dealing Erik Haula to Carolina on Wednesday night in exchange for prospect Nicolas Roy.

There is still more work to be done. Vegas can sneak under the $81.5 million cap by moving David Clarkson's contract – also a potential trade option – to the long-term injury list. But they still need to sign RFA Nikita Gusev, who led the KHL in scoring last season.

Defenceman Colin Miller remains the most likely to go as a serviceable blueliner making $3.88 million. Plus, Ryan Reaves has made the list through no fault of his play, but purely because his $2.77 million salary seems like a luxury the Golden Knights probably can’t afford.

Focus this week has been almost entirely on this summer’s free agent class, but there is still roster jockeying to be done.