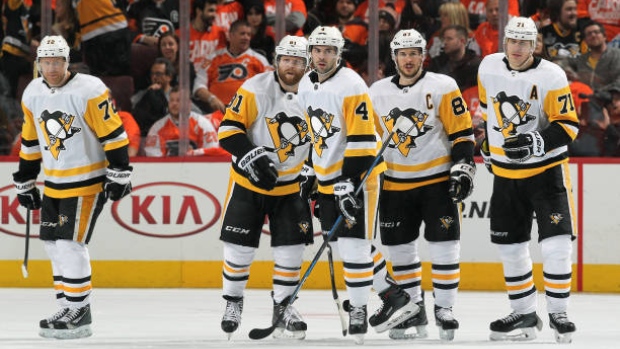 Jim Rutherford’s big-game hunt is on as originally scheduled this weekend.

Rutherford cleared $5.25 million in crucial salary cap space on Wednesday when his Pittsburgh Penguins traded winger Conor Sheary and defenceman Matt Hunwick to the Buffalo Sabres in exchange for a conditional fourth-round pick.

That opens up the space required for Rutherford to target any number of big names to take a run at a sixth Stanley Cup in franchise history.

Could the Pens dabble in the market for Rick Nash or James van Riemsdyk to play alongside Sidney Crosby? How would Max Pacioretty look in that spot? Rutherford drafted and developed Jeff Skinner in Carolina, who remains No. 3 on our Trade Bait board. The focus may be on defence, where the Penguins could be targeting Jack Johnson.

The bigger question is who will follow Rutherford in clearing cap space: the Winnipeg Jets or Tampa Bay Lightning?

Both teams are going to have to make similar transactions if they’d like to fulfill their off-season wish lists.

With just over $5 million in cap space, the Lightning – one of six teams selected for an in-person pitch by John Tavares – can’t afford to sign Tavares as currently constituted. That’s why alternate captain Ryan Callahan, who has two years left at $5.8 million, joins the board at No. 15. Tyler Johnson has also been rumoured as a potential trade chip if Callahan is more difficult to move.

Winnipeg GM Kevin Cheveldayoff has made no secret his interest in re-signing centre Paul Stastny. The Jets get thin quickly down the middle. But Stastny will require a big ticket after his successful rental run with Winnipeg. That’s why Mathieu Perreault joins the list at No. 19.

(For what it’s worth, all three players listed at No. 19 have been traded so far this off-season: Alex Galchenyuk, Dougie Hamilton and Sheary)

The Jets would love to find a taker for Steve Mason’s $4.1 million deal, but that might require a buyout with such a flush goalie market and only three teams looking for starters. Restricted free agent Jacob Trouba is still on the board (21). Tyler Myers could also be a potential trade candidate at some point.

It all depends how Cheveldayoff wants to play it and how much he values the centre depth Stastny provides. This is a critical summer to setup the Jets’ payroll for years with Connor Hellebuyck, Josh Morrissey, Trouba, Joel Armia and Adam Lowry all hitting restricted free agency at once, followed closely by Patrik Laine and Blake Wheeler next summer.

Here is TSN’s latest Trade Bait board, which always seeks to blend prominence of player with likelihood of a trade: