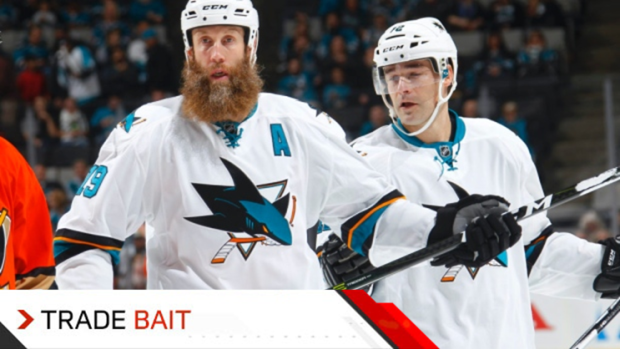 This is where the rubber meets the road.

This weekend, the San Jose Sharks are beginning to have those uncomfortable conversations to determine the future of two franchise icons beyond Monday’s NHL trade deadline.

Multiple teams have inquired about both Joe Thornton and Patrick Marleau.

Now GM Doug Wilson has to ask them: Would you like to go chase a Stanley Cup elsewhere this spring?

It’s a question that has never really been raised in San Jose. And there is no wrong answer from the Sharks’ perspective, no pressure to leave. But Wilson will likely to be happy to oblige if that is the request.

At this point, Marleau is probably the more likely of the two 40-year-old greybeards to be moved -  which is why he’s up to No. 11 on the TSN Trade Bait board. Marleau is more productive with 10 goals, he’s a cheaper salary cap addition playing at the league minimum $700,000, and he’s already moved on from San Jose once - to sign with Toronto in 2017. The shock to the system is gone.

At least one Eastern Conference Stanley Cup contender is ready to pull the trigger on Marleau.

Thornton might have more pause in making the same decision to go. Yes, he’s also been traded once before, but he’s been in San Jose since 2005. Those close to Thornton believed he’s waffled on both sides of the notion of a trade in the last number of weeks.

The Tampa Bay Lightning and Boston Bruins have internally discussed the idea of adding Thornton, but some believe his preference is to stay in the West. The Avalanche might be a fit - and he has family in Colorado. Plus, it’s easy to imagine Jumbo Joe reuniting with Little Joe (Joe Pavelski) in Dallas or former coach Pete DeBoer in Vegas.

One veteran mainstay who won't be joining the Trade Bait board is longtime Minnesota Wild captain Mikko Koivu. He informed GM Bill Guerin on Saturday that his preference is to remain in Minnesota beyond Monday's deadline.

Guerin had been clear in that Koivu would call his own shot.

Koivu, 36, earned that right as the franchise leader in points (703), assists (500) and games played (1,019) over 15 seasons with the Wild. He is the NHL’s fourth-longest tenured captain behind only Zdeno Chara, Sidney Crosby and Jonathan Toews.

Koivu’s offensive production has dropped this season, down to just two goals and 15 points, but teams were interested ​in Koivu's defensively conscientious game, his leadership qualities and his face-off expertise. They'll have to search elsewhere now.