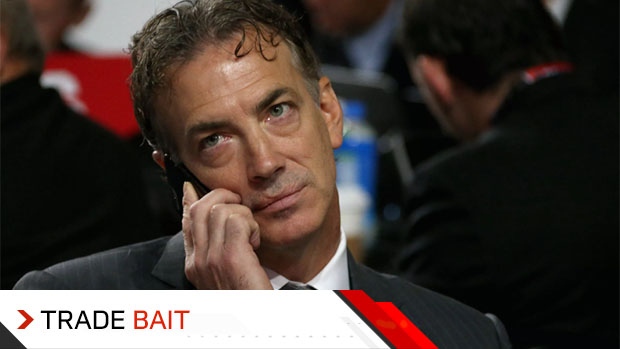 Colorado Avalanche GM Joe Sakic was in a playful mood on Wednesday night when asked about the presence of Canadiens counterpart Marc Bergevin at back-to-back games this week in Denver.

“His daughter goes to CU [University of Colorado], you should ask Berg about that,” Sakic told reporters, smiling. “He just loves hockey. He loves watching games.”

It’s a plausible story, except for the fact that Bergevin brought Habs assistant GM Scott Mellanby with him to both games.

So, either Bergevin (a noted prankster) is pulling a public misdirection and he was camping out in Denver to throw everyone off the scent, or Bergevin and Sakic are talking something significant. That much time and that many resources aren’t spent on a trade for Jordan Weal. The Canadiens are not believed to be interested in moving Max Domi or Carey Price.

Although, one admission that Sakic did make was that the Avs are searching for a depth goalie with Philipp Grubauer out.

“Just for protection,” Sakic said. “We’ll see where that goes.”

Sakic wouldn’t bite when asked about the other needs he’d like to address. We reported on Tuesday that the Avs are one of the front-runners for Chris Kreider.

But who might be he eyeing from the Habs? Ilya Kovalchuk would be a potential fit, but probably a secondary option. Is he trying to pry Jeff Petry from the blueline? Or Jonathan Drouin or Tomas Tatar up front?

The Avs are missing forwards Mikko Rantanen, Nazem Kadri, Matt Calvert and Colin Wilson – but Sakic said they’ll all be back before the end of the regular season and “injuries won’t have any impact on what we’re going to do.”

The key thing that players like Drouin, Tatar and Petry all have in common is term on their contracts.

Like most GMs, Sakic said he would “prefer not” to trade his first-round pick.

With four days to sort it out, the Avalanche are one of seven teams with Stanley Cup aspirations who have yet to make a trade. Here is a look at the other six:

BOSTON BRUINS: The Bruins’ top target is hometown kid Chris Kreider. They’re battling it out with the Avalanche and others as they try to avenge their Game 7 loss on home ice in the Stanley Cup Final. If Boston loses out on Kreider, one secondary target may be pending UFA and Sabres winger Conor Sheary, who helped the Penguins to back-to-back Cups in 2016 and 2017. The Bruins are also potentially interested in adding a depth defenceman for the chase. You can never have too many.

CALGARY FLAMES: Calgary is Canada’s most fascinating team heading into Monday. GM Brad Treliving is out to fill two holes: a right-shooting, top-six forward and depth on the blueline. The complicating factor is both T.J. Brodie and Travis Hamonic are pending UFAs. In an ideal world, Treliving would love to have one of those defencemen signed to an extension by Monday. That would enable him to make a bigger hockey trade (a player with term, like Devils right wing Kyle Palmieri?) and focus a little less on defence. The Flames (and Blues) were two teams that went deep on Brenden Dillon before San Jose shipped him to Washington. The truth is that, at the moment, the Flames are all over the place. Treliving is making calls on forwards and defencemen. They could go in either direction – or fill both needs – by Monday. One thing is certain: the Flames don’t have the option to fall short of the playoffs. This team is built to win now, particularly with this defence corps and their ages and contract situations, and the heat is on. No pun intended.

CAROLINA HURRICANES: Since the Lightning traded theirs for Blake Coleman, the Canes are the only contender with an extra first-round pick still at their disposal to make magic happen. That will be the edict from owner Tom Dundon as Carolina looks to capitalize on the momentum in the market after last year’s run to the Eastern Conference Final. Dundon told The Athletic on Wednesday that playing in the tough Metropolitan Division is “no excuse.” The return of Justin Williams was Carolina’s deadline acquisition up front. But the Canes are believed to be doing their due diligence on Canadiens defenceman Jeff Petry, Devils defenceman Sami Vatanen and Blackhawks goalie Robin Lehner.

COLUMBUS BLUE JACKETS: One year ago, GM Jarmo Kekalainen swung for the fences and traded for two of the top rentals on the market in Matt Duchene and Ryan Dzingel. Kekalainen and the Blue Jackets took offence to the notion that they would take a step back this season once Duchene, Dzingel, Artemi Panarin and Sergei Bobrovsky walked. They’ve proven doubters wrong, now right on the brink of another playoff berth with a strong nucleus – despite an ungodly number of injuries to key players. Kekalainen plays his cards close to the vest, but many believe he’s at least inquired about Kreider and Palmieri, and we reported they checked in on Alec Martinez, who went to Vegas. Stay tuned.

DALLAS STARS: GM Jim Nill is on record as saying he is “definitely fine and encouraged by our team if we stand pat.” Tampa Bay is the only team with a better record since the Stars started 1-7-1. They’re 33-12-5 since and have allowed the fewest goals in the NHL. They’re going to be a stingy out in the playoffs. Without second- and third-round picks, Nill is more interested in a hockey trade. Adding scoring would be the goal, but Nill told reporters he thinks his top-end (read: highest-paid) forwards have “more to give.” There are rumblings Joe Thornton would like to take a run at a Cup and stay in the West. Would Jumbo Joe be interested in reuniting with Little Joe in Joe Pavelski? Someone like Thornton would seem to make a lot of sense.

PHILADELPHIA FLYERS: The last time the Flyers were buyers at the trade deadline was back in 2012 , which is also the last time Philadelphia also won a playoff round. This year’s Flyers are right on the playoff bubble despite holding the eighth-best record in the NHL, and there is probably a fair amount of pressure on GM Chuck Fletcher to get into the dance. The biggest question is the status of Nolan Patrick. The Flyers signed Kevin Hayes so Patrick, the 2017 second-overall pick, could grow in the third-line centre role. Patrick has sat out the entire season with a migraine disorder, but recently resumed full practices with the team, possibly giving Fletcher pause when considering whether another centre like Jean-Gabriel Pageau is a necessity or a luxury. Either way, Fletcher doesn’t seem interested in parting with his first-round pick to land Pageau.