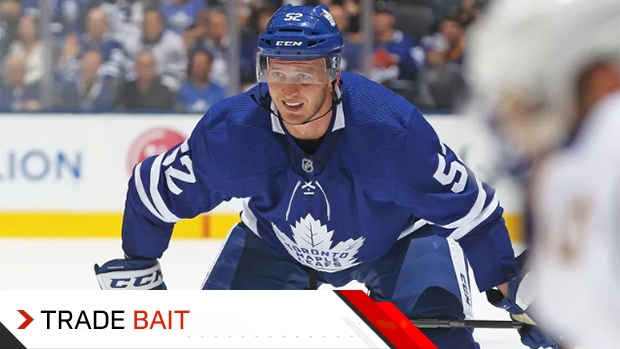 It’s so early in the season for a TSN Trade Bait board that it’s scary. But it is Halloween - and we do like handing out little trade treats to mark the occasion.

The Trade Bait board will undoubtedly take different shape as we move closer to the Feb. 24 trade deadline (117 days away!) One thing will probably remain consistent: Some of the marquee pending free agents, who in past years would almost definitely become bait, will be expected to remain with their clubs for a playoff run - even without the guarantee of a future contract.

After that, the status of many of the players in the final year of their contracts will be dependent on team performance.

That’s why perhaps the biggest name, New Jersey’s Taylor Hall, debuts at the bottom of the latest Trade Bait list. While it’s believed talks between the Devils and Hall’s camp have been generally positive, the Devils (2-5-3) are 15th in the East – and Hall made some interesting comments about the Devils’ fans on Wednesday night that probably won’t soon be forgotten in North Jersey.

Across the river, the Rangers are still feeling the pains of their rebuild. It might not be all that premature to fire up the Chris Kreider chatter. Could Kreider’s speed, skill and contract help a team like the St. Louis Blues on the wing with Vladimir Tarasenko out for five months?

The Calgary Flames have decisions to make on defence with both Travis Hamonic and T.J. Brodie in the final years of their deals. There is the belief that Calgary was close to a deal with New Jersey at last June’s Draft involving Brodie, the night before the Devils pulled the trigger on P.K. Subban. Now, after initial discussions with Hamonic’s camp proved unfruitful, it’s possible that Hamonic could be on the move.

That Calgary’s up-and-down start (6-6-2) hasn’t met expectations throws a wild into the mix. Will GM Brad Treliving look for an early season shakeup? If the Flames get it together, it isn’t difficult to envision both defencemen sticking around for the season.

The Toronto Maple Leafs face a more imminent deadline with injured winger Zach Hyman nearing a return. Three players will have to move from the current roster to fit under the salary cap. That likely includes some combination of Martin Marincin and two forwards. Toronto is trying to find a landing spot for Nic Petan the same way they did with Josh Leivo a year ago. Which other forwards could go? That leaves Nick Shore, Jason Spezza and Dmytro Timashov as the other possibilities – and the sense is that Toronto’s first preference would be to sneak everyone through waivers.

Will a team looking for goaltending take a chance on Jonathan Quick? His salary owed drops significantly over the final three years of his contract. The Kings like Jack Campbell, and Cal Petersen begins a one-way contract next year.

Will teams be scared off by yet another injury to Columbus defenceman Ryan Murray? Murray will miss the next three to four weeks with a broken hand.

Will interest pick up on Edmonton’s Jesse Puljujarvi? Still just 21, the No. 4 overall pick from 2016 seems to be finding his groove back on the big ice in his native Finland. He has 11 goals in 17 games this season in the Finnish Liiga. The bigger test will be when he suits up for Team Finland against better talent at the Karjala Cup next weekend. Oilers GM Ken Holland will be in Finland to check on Puljujarvi’s progress.

Here is the first TSN Trade Bait board of the season, where the ranking always seeks to blend a player’s prominence with his likelihood of a trade: