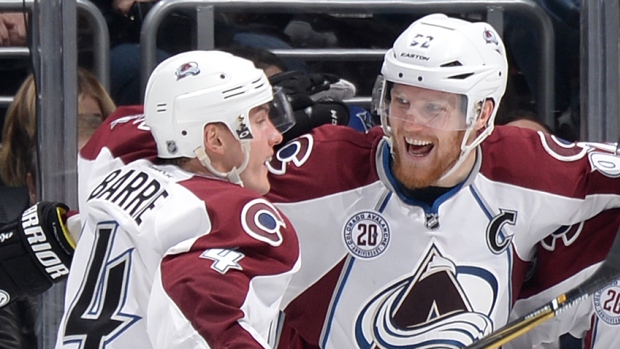 The Edmonton Oilers might not be done yet on the trade market.

General manager Peter Chiarelli would like to add a second impact defenceman to the Oilers’ lineup to complement Adam Larsson. That could come in the form of free agent Jason Demers, who stands to cash the largest cheque among all blueliners on Friday.

That acquisition could also be larger than Demers.

The word circulating on Thursday was to “keep an eye on the Avalanche.”

Along with St Louis’s Kevin Shattenkirk, Colorado’s Tyson Barrie is the top right-shooting defenceman believed to be available this summer. Many doubt Shattenkirk’s interest in signing a long-term deal in the Western Conference, which may make a trade to another West team unlikely.

Barrie, 24, is a different story. He is a restricted free agent and the Denver Post reported GM Joe Sakic made a long-term contract offer to Barrie’s camp last weekend at the draft in Buffalo. He remains unsigned. Sakic has vowed to keep Barrie, even if that means using the arbitration process, but his comments were similar last June just days before dealing centre Ryan O’Reilly to Buffalo.

Barrie fell one point shy of hitting the 50-point plateau for the second consecutive season. He is the perfect complement to Larsson in that he can quarterback a power play; Barrie averaged more than three minutes per game on the power play last season.

The Avalanche would likely only be willing to move Barrie by getting another young, top-pairing defenceman in return — leaving him as his next team’s trouble to sign.

Avs captain Gabriel Landeskog and Matt Duchene have both been linked in trade rumblings over the last year, and one or the other could be used as a chip to help bring back that blueliner.

For now, Edmonton’s Ryan Nugent-Hopkins, Nail Yakupov and Jordan Eberle all remain on the board. Eberle, 26, appears to be the least likely to be traded among the three, hence his lower ranking.

Tampa Bay’s Ben Bishop also moved up a few spots. While the trade market for goaltenders quieted down after Calgary landed Brian Elliott last Friday, the Dallas Stars are believed to be interested in Bishop as a solution to their goaltending woes. The Lightning could well begin the season with Bishop and Andrei Vasilevskiy, but if GM Steve Yzerman does not have plans to re-sign Bishop, his trade value will never be higher than it is this summer for expansion draft considerations.