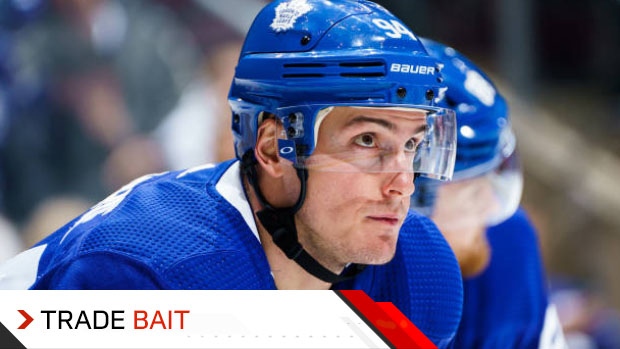 With just three days until TradeCentre, three new names have joined the TSN Trade Bait board.

The newest members in the Top 50 club are two pending UFAs in Maple Leafs defenceman Tyson Barrie (No. 5) and Hurricanes centre Erik Haula (No. 11), plus one pending RFA in Canucks defenceman Troy Stecher (No. 25).

To help get you set for Monday’s deadline, here is a primer on each of Canada’s seven clubs:

CALGARY FLAMES
Primary Target: Right-shooting, top-six forward
Secondary Target: Depth defenceman
Scoop: The only guarantee that can be made about the Flames’ trade deadline operation is that GM Brad Treliving has left no stone unturned. It’s possible no GM has made as many calls, inquiring about all of the top targets on forward and defence. Treliving has many balls in the air, which is why it’s too soon to predict which way the Flames will go. Calgary would ideally like to sign one of their pending free agent defencemen in T.J. Brodie or Travis Hamonic to an extension before Monday, which could open up other possibilities. The belief is Noah Hanifin was part of a package that the Flames put together to try to land Taylor Hall from New Jersey in November. Could they target another New Jersey winger with term in Kyle Palmieri? He would be a perfect fit as a right-shooting winger. The bet is that Treliving isn’t empty-handed on Monday at 3 p.m., because the Flames can’t afford to miss out on the playoffs – not with a roster structured and paid to win now.

EDMONTON OILERS
Primary Target: Third-line centre
Scoop: With little appetite to trade his first- or second-round picks, plus limited cap space, Oilers fans shouldn’t be dreaming big ahead of Ken Holland’s first trade deadline in Edmonton. So unless, as Holland put it, a team is willing to “get creative,” the Oilers will be nibbling around the edges for inexpensive depth pickups. Ottawa’s Tyler Ennis has been floated as one possibility – a player the Oilers courted last summer in free agency – even though the ideal target would be further up the Sens’ lineup in Jean-Gabriel Pageau. The other big concern for Holland in managing this deadline is injecting a new personality into the second-place Oilers’ dressing room. The Oilers have exceeded expectations and survived the valleys because head coach Dave Tippett has them playing as a cohesive team. There is always a danger in tinkering, especially bringing in players who may not ultimately move the needle.

MONTREAL CANADIENS
Primary Target: Next year
Scoop: The goal was for the Montreal Canadiens to make the next step in their retooling process and make the playoffs this season. That won’t be happening, so GM Marc Bergevin is now tasked with acquiring assets for the future, while still keeping the Habs in position to finally take that step next season. For some players, such as centre Nate Thompson, there isn’t much of a decision to make. But it gets increasingly difficult from there. At what point is the future juice worth the squeeze of missing that player’s production for next season? Bergevin is playing with house money when it comes to Ilya Kovalchuk, who has six goals and 12 points in 21 games after being signed off the scrap heap for the league minimum. The Habs have reportedly worked out parameters of what it would take to re-sign Kovalchuk. The question is: What return is necessary to part with a player who you think might be able to contribute 20 goals next season? It’s the same question being asked about defenceman Jeff Petry. Because while teams would be lining up to trade for Petry, the Habs would have an awfully difficult time replacing his 23 minutes a night and 45 points on the blueline next year – and that’s where the focus is now.

OTTAWA SENATORS
Primary Target: 2020 NHL Draft
Scoop: June’s Draft is in Montreal, but all eyes will be on the Ottawa Senators, who own five picks in the first two rounds – with more likely on the way. Vladislav Namestnikov is likely to be the first Sens player offloaded, as he remains out of the lineup while Ottawa opts to protect his trade value. Pending UFAs Ron Hainsey and Tyler Ennis could add to the stockpile. The wild card is centre Jean-Gabriel Pageau. The Ottawa native’s future in his hometown may go down to the wire on Monday, as the Sens remain engaged in contract talks to extend him. Pageau is already five goals north of his previous career-best of 19. He likely would have been moved already if the Sens could net a first-round pick in return. But that hasn’t happened, leading GM Pierre Dorion to calculate whether it makes better sense to keep him. Pageau would be a prime fit on a number of teams looking for centre depth, like the Philadelphia Flyers or Edmonton Oilers. At this point, Pageau is probably slightly more likely to be traded than stay, but it could go either way.

TORONTO MAPLE LEAFS
Primary Target: Right-shooting defenceman
Scoop: It’s been a fascinating few days for the Leafs in this rollercoaster of a season, and there are bound to be a few more because the Leafs have engaged in talks with other teams about pending UFA defenceman Tyson Barrie, who is up to No. 5 on the latest Trade Bait board. There has been no shortage of interest, with at least three teams involved. Barrie’s availability should not be viewed as a sell-off prior to the deadline. Far from it. In exchange for Barrie, who is unlikely to re-sign in Toronto, the Leafs would like to trade for another right-shooting defenceman who might be a better fit. Or, perhaps more likely, they could trade Barrie to get back currency (first-round pick, prospects) that would then be flipped for that defensive presence they’ve coveted. The Leafs have also been linked to discussions about Namestnikov, but whatever urgency might have existed to fill that need may have dissipated with the addition of Denis Malgin from Florida earlier in the week.

VANCOUVER CANUCKS
Primary Target: Bolster the defence
Secondary Target: Toughness quotient
Scoop: The Canucks were linked to Barrie on Thursday, the defenceman they tried to acquire from Colorado last summer. There was no question Barrie would have been a fit then, before knowing the impact Quinn Hughes would have on the Canucks. But the 20-year-old Hughes already quarterbacks Vancouver’s power play so well – and that is Barrie’s specialty. Does that mean Barrie is more a luxury than necessity in Vancouver? He would be as a rental, for sure, but they might be able to make the dollars work on an extension. GM Jim Benning continues to work the phones on that front and in a bid to add a bit of toughness and grit to the lineup. The Canucks were interested in Devils’ pending UFA winger Wayne Simmonds, but it appears they will be unable to squeeze him into their salary cap structure with Brock Boeser potentially able to return before the end of the season.

WINNIPEG JETS
Primary Target: Top-four defenceman
Secondary Target: Third-line centre
Scoop: Against the odds, the Jets arrive on the precipice of TradeCentre in a Stanley Cup playoff spot. That’s put GM Kevin Cheveldayoff in go-mode to give the Jets every chance to get in without mortgaging the future. In an ideal world, Winnipeg would love to find a way to fill Dustin Byfuglien’s void on the blueline, but an authentic replacement for ‘Big Buff’ might have to wait until the summer. (They’d also like to salvage a return for the suspended Byfuglien, as well.) But with Bryan Little on the shelf for the season and Adam Lowry and Mathieu Perreault still listed as “week-to-week,” the Jets could use help down the middle. If the Jets felt adding centres Kevin Hayes and Paul Stastny in back-to-back deadlines was the need, it’s especially true now with their injuries. The difference this year is that the Jets aren’t in the market for rentals since they’re no slam dunk to get a ticket to the dance.

Here is TSN Hockey’s latest Trade Bait board, whose rankings always seek to blend a player’s prominence with his likelihood of a trade: