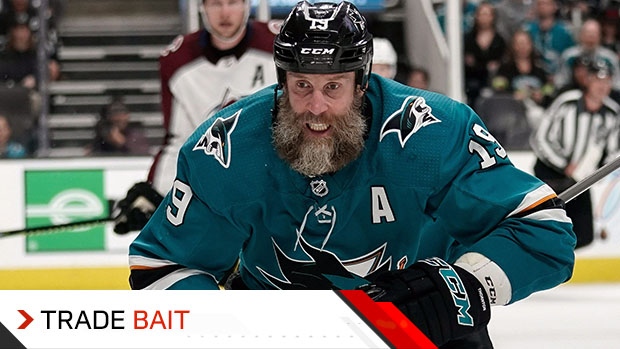 Teams are beginning to circle around the San Jose Sharks.

According to HockeyViz, there is a 99 per cent chance the Bay Area is home to no man’s land this spring – a 99 per cent shot that the Sharks will both miss the Stanley Cup playoffs and miss out on the Draft Lottery, since the Ottawa Senators hold their unprotected pick from the Erik Karlsson trade.

That raises all sorts of questions about the Sharks’ roster.

The biggest one: Will Joe Thornton raise his hand and ask to chase a Stanley Cup elsewhere?

The 40-year-old future Hall of Famer is one of 13 intriguing new names added to the TSN Trade Bait board on Monday, including teammates Patrick Marleau and Barclay Goodrow.

Make no mistake: This will be Thornton’s call – and not only because Thornton holds the full no-move clause hammer. After 1,089 games in a Sharks uniform, it’s unlikely that GM Doug Wilson would go to Thornton asking him to consider a certain trade scenario.

All Thornton would have to do is let it be known that he is not interested in moving. End of story. So far, that has not happened, leading some close to him to believe that he’s feeling conflicted with two weeks to go until TradeCentre.

Contenders are doing their homework behind the scenes. The Boston Bruins and Tampa Bay Lightning are two teams that have reportedly internally discussed the idea of adding Jumbo Joe to their lineup.

Could you imagine the scene of Thornton returning to where it all began in Boston? Fans were clamouring for a San Jose/Boston Stanley Cup matchup last summer when the Sharks made it to the Western Conference final.

Thornton added four goals and 10 points in 19 games on the Sharks’ playoff run last year, his 13th in San Jose that fell short of the ultimate goal.

There has been no indication so far that Thornton intends for this to be his final NHL season. He collected his 1,500th career point last week – moving him into 14th on the all-time list – but this has been the least productive season of his career, with just two goals and 24 points.

If he decides with his family to chase the dream elsewhere this spring, that certainly would not preclude Thornton from returning to the Sharks over the summer as a free agent. This is just the second time in Thornton’s 14-year tenure in San Jose that the Sharks likely won’t make the playoffs – and really the first time they’re far from contention.

One of the game’s all-time great characters being on the move would certainly add spice to a trade deadline that could use some.

With two weeks to go, here are 40 names in play on the latest Trade Bait board – which always seeks to blend a player’s prominence with his likelihood of a trade: