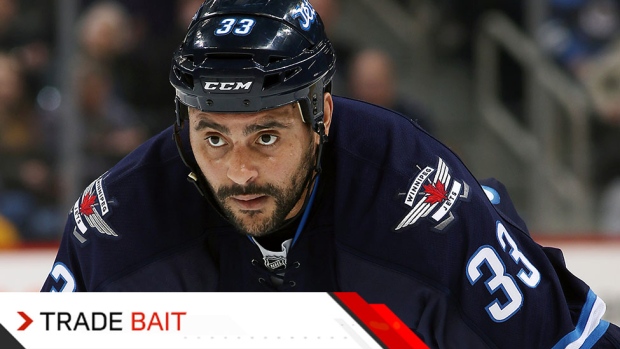 Another day, another twist in the Dustin Byfuglien saga.

Turns out, the Winnipeg Jets have waited to pull the trigger on a mutual contract termination with Dustin Byfuglien because multiple sources say the Jets are attempting to exhaust all trade options for the hulking defenceman.

After being thrust into an uncomfortable position by Byfuglien at the start of the season, Jets GM Kevin Cheveldayoff is now seeking to salvage a return.

Sources say suitors have been in regular contact with Cheveldayoff over the last weeks about Byfuglien’s future, but talks have only intensified in recent days leading up to the NHL’s Feb. 24 trade deadline.

There is no guarantee that Byfuglien will be dealt – in part because of the fact that sources say he remains a long shot to return to the ice this season – but Big Buff’s mere potential impact warrants his debut at No. 10 on the latest TSN Trade Bait board.

Why would a team be interested in Byfuglien now?

If a team believes they could successfully lure him back to the rink, Byfuglien’s once massive $7.6 million salary cap hit has dwindled down to just a prorated $1.84 million now with only 45 days left in the regular season.

It is a potential low-risk, high-reward play. Few could impact a game like ‘Big Buff’ when he’s engaged, as evidenced by his bone-crunching hits, powerful shot, and knack for the moment. He was the Jets’ leading scorer in last year’s first-round series with St. Louis, collecting eight points in six playoff games – his last NHL action to date.

At the worst case, if Byfuglien refuses to report, then he will remain suspended without pay – at no salary cap consequence to the acquiring team. That team could then move to terminate Byfuglien’s contract, like the Jets can now, or opt to hold his rights into the summer to see if he has interest in resuming his career next season.

Those close to Byfuglien wonder whether he might be able to be re-energized by the idea of reuniting with old coach Joel Quenneville and GM Dale Tallon in Florida. Or whether the Minnesota Wild might intrigue the proud Roseau, Minn., native. Even if still suspended, Byfuglien would need to be on the acquiring team’s reserve list by Feb. 24 at 3 o’clock to be eligible for postseason play.

It’s believe that Byfuglien has not skated since September. He has been suspended without pay by the Jets for failure to report since he arrived at training camp and asked to take time off to contemplate retirement.

After Byfuglien revealed a lingering ankle injury and underwent surgery in late October, the NHLPA filed a grievance in conjunction with Byfuglien in an attempt to have a neutral arbitrator rule on a legitimate hockey injury as a course to recoup this season’s lost wages.

But once Byfuglien declined to continue to the on-ice portion of his rehab progress in January, the NHLPA’s ability to defend the grievance became moot.

With that grievance in the rearview mirror, Cheveldayoff and the Jets have been given the green light – with the support of the NHL – to use the $7.6 million that they’ve set aside all season for Byfuglien at the deadline as Winnipeg sees fit.