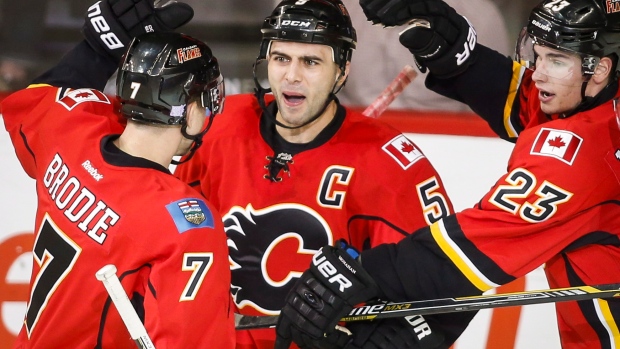 Not Burning to Buy

Calgary Flames general manager Brad Treliving is not willing to risk his team's long-term future for a playoff push this season.

The Flames currently hold the second and final wild card spot and hold a three point advantage over the Los Angeles Kings. Still, Treliving said the Flames remain focused on the future and are not prepared to pay for rental players.

"With the way the team has performed, I think the responsibility of the manager is you're obviously looking at the long-term vision of this team," Treliving told the Flames' website. "Those 'A' assets that I look at, those first round picks, top young players, it takes a lot of pain to get those. As we continue to build this organization, those are very, very valuable assets and ones we're not prepared to throw out for the sake of something that might, might help us for a short period of time. You're looking at that long range."

Treliving added his current focus is on assessing the future of the current Flames set for unrestricted free agency this summer.

"We're going to evaluate and continue to evaluate each situation independently and see where we get to as we get to the deadline and beyond," he said.

The Price for Franson?

According to Lance Hornby of the Toronto Sun, the Toronto Maple Leafs are looking for a second-round pick in exchange for defenceman Cody Franson.

Franson, who is set to become an unrestricted free agent this offseason, has six goals and 23 assists in 49 games with the Leafs this season.

Franson will turn 27 this August.

Eye on (another) Prize?

Though the New York Rangers – and several other teams – could use the services of forward Antione Vermette, Steve Zipay of Newsday believes the Blue Shirts should look elsewhere on the Coyotes roster for help.

While Zipay believes the asking price for Vermette would include 2011 first-round pick J.T. Miller and likely more from the Rangers, Martin Hanzal could be had at a cheaper price.

Unlike Vermette, Hanzel is signed through the 2016-17 season at an affordable cap hit of $3.1 million. Ziplay believes defenceman John Moore, who was a healthy scratch multiple times in January, and a mid-round pick could land the 27-year-old Hanzal.

The Rangers are believed to be looking to add a two-way centre to their lineup. Toronto Maple Leafs forward Mike Santorelli is another option Ziplay believes the Rangers could look at.

If Moore is traded, Ziplay believes the Rangers will look to find a veteran defenceman to replace him.

To High to Yandle?

Ansar Khan of Michigan Live notes that though the Red Wings are interested in adding a defenceman at the trade deadline, the price for Keith Yandle will likely be too high for Detroit.

Khan speculates the Red Wings will not be willing to part with the Arizona Coyotes’ high price point for their leading scorer. That price could include a top prospect and/or a current young roster player.

Yandle has four goals and 34 points in 50 games with the Coyotes this season. He is signed through next season.