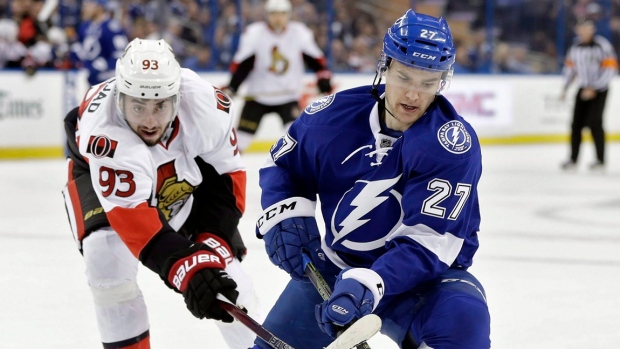 Jonathan Drouin is getting closer and closer to leaving Tampa Bay and Lightning general manager Steve Yzerman is more than willing to say goodbye.

Yzerman told the Tampa Bay Times that he's thinking about the team on the ice and how to improve the product by moving the former third-overall pick.

“A lot of things factor into it when making the trade, a lot of things to consider here,” Yzerman said. “But number one is, ‘Can I do something involving Jonathan that benefits the team that makes us better right now that helps us for the playoffs? I’d certainly like to do that.”

The months-long saga will likely only end in a trade. Drouin has not played since late January due to a team-imposed suspension.

Patrick Wiercioch appears to be the odd man out in the busy Ottawa Senators defence corps.

According to the Ottawa Sun's Bruce Garrioch, the 25-year-old blueliner has been in the rumour mill for a while now and there is some interest in his services.

The math is simple too. With Dion Phaneuf, Erik Karlsson, Cody Ceci and Marc Methot filling out the top four, Mark Borowiecki coming in at No. 5 and the recent two-year extension for rookie D-man Chris Wideman, Wiercioch is most likely to have a new home after the Feb. 29 trade deadline.

The Burnaby, B.C. native has played in 50 games for the Senators this season and 209 since he broke into the league with the franchise in 2010.

Yesterday, TSN Hockey Insider Bob McKenzie reported that the Canucks sent a list of available players to the other 29 NHL teams, however, Hamhuis and Vrbata were not on it.