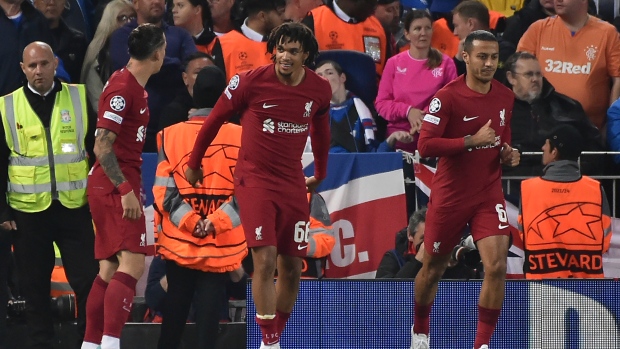 LIVERPOOL, England (AP) — Nobody was questioning Trent Alexander-Arnold’s attacking qualities, so it would be a stretch to say his perfectly executed free kick was a riposte to his critics.

Still, his seventh-minute strike that set Liverpool on course to a totally dominant 2-0 win Tuesday against Rangers in the Champions League felt significant.

His joyous celebration was a release of tension for a player whose World Cup place looks in serious jeopardy.

Whether this performance will be enough to convince England manager Gareth Southgate to include him in his squad for Qatar remains to be seen – but, for Jurgen Klopp, Alexander-Arnold is pivotal to Liverpool’s recovery from such an uncertain start to the season.

Questions also hang over the Merseyside club – but the one-sided contest at Anfield should serve to settle nerves among his players.

The 40-year-old McGregor engaged in a personal dual with Darwin Nunez in the first half – and a spectacular fingertip save to push away a goal-bound effort from Diogo Jota after the break stood out from a host of stops in the face of overwhelming Liverpool pressure.

Klopp has defended Alexander-Arnold amid growing criticism of his defensive frailties and continued that theme on Tuesday, even if it was another occasion when the fullback’s attacking prowess caught the eye.

“Our timing was not right and we take risks in defending, everybody knows that. When the timing is not right, you open gaps, and these gaps are very often at the back of Trent. Not because of him, but because of other situations and he has to track back and, yes, we were not in the perfect moment. That’s why we adjusted it slightly (tonight).”

It is difficult, though, to draw too many conclusions from a game where the gulf in class between English and Scottish football was fully exposed.

Liverpool’s early-season struggles were nowhere to be seen in the face of such meager opposition from Rangers.

The Glasgow club looked out of its depth from the opening moments as the home team completely dominated the ball and the chances.

McGregor was called into action after just three minutes to stop an effort from Nunez. That would become a theme of the first half.

Liverpool was ahead shortly afterward when Alexander-Arnold lined up a free kick just outside the box and curled a perfect shot into the top corner to spark wild celebrations inside Anfield.

The only surprise by halftime was the fact Liverpool failed to add to its lead.

But Salah killed off any chance of an unlikely fightback with his 53rd-minute penalty after Leon King brought down Luis Diaz in the box.

“Don’t forget the opposition we are playing,” said Rangers coach Giovanni Van Bronckhorst. “Everyone is thinking, ‘OK it’s Liverpool, they are out of form, it’s going to be an easy game.’ Well you see today the level they can reach.

“The gap is obvious. You don’t have to look at the squads we both have. We are competing against one of the best sides in Europe. The gap is there.”

For Klopp, there was a sense of relief, after recording back-to-back wins in the competition and the chance to build some momentum and confidence.

“I can’t wait for the moment when I can read newspapers again because I didn’t read them for weeks,” he joked. “I don’t know what’s happening in the world, to be honest. I know the big news and the bad news, I know all of them.

“The criticism is completely fine. We are not over the moon about our situation. But we played some really good games – it’s not like it’s 10 years ago, it’s not too long ago. I saw tonight a team fully committed and that’s what we have to do.”

These are tentative steps forward for Liverpool and Alexander-Arnold — and neither club nor player will get too carried away on the basis of this one night at Anfield.