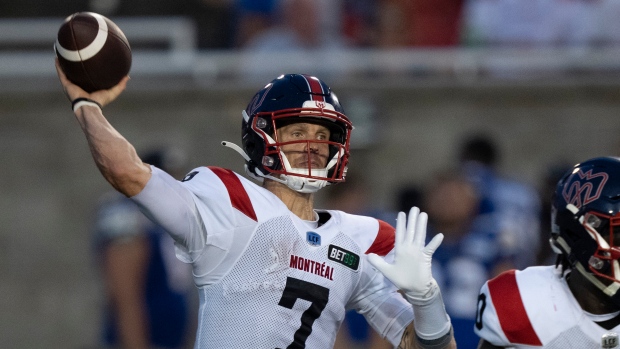 Montreal Alouettes quarterback Trevor Harris will start under centre for the team's Week 10 showdown with the undefeated Winnipeg Blue Bombers, the team announced.

The veteran pivot was has been dealing with a lingering back injury originally suffered in their Week 8 matchup with the Hamilton Tiger-Cats and was limited in his Day 1 and Day 3 practices.

Harris has started all eight games for the Alouettes this season, completing 67.8 per cent of his passes for 1,727 yards, seven touchdowns and seven interceptions.

Meanwhile, defensive back Wesley Sutton is in concussion protocol and will be a game-time decision. Tyson Philpot gets full kick return duties in Chandler Worthy's absence.

The Als head into Week 10 at 2-6, good for third place in the Eastern Conference.