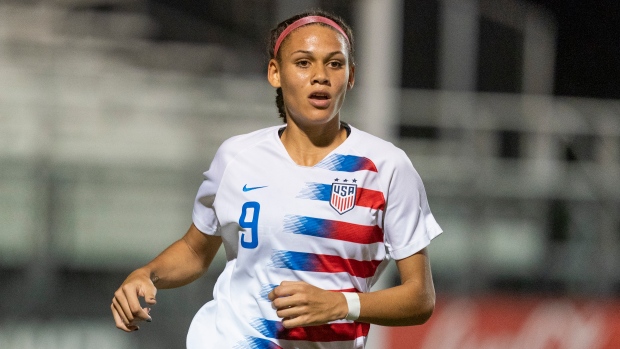 CARY, N.C. — Trinity Rodman became the youngest American player to score in the National Women's Soccer League with a goal in her professional debut for the Washington Spirit on Saturday.

But the Spirit could not overcome the North Carolina Courage, falling 3-2 in the Challenge Cup match.

Rodman, the 18-year-old daughter of former NBA star Dennis Rodman, was the second overall pick in the NWSL draft earlier this year. A standout on the U.S. youth national teams, she decided to go pro before her freshman season at Washington State.

“My team has helped me a lot, obviously, being a really young player and very new, it’s definitely a lot faster, girls are a lot stronger, a lot more intelligent, at this level," Rodman said. “I think just getting advice from my teammates in scrimmages and practices, I’ve been able to kind of think ahead. And I think that’s a huge part of what’s helped me in the game. ”

The NWSL's Challenge Cup kicked off Friday. Each of the league's 10 teams are divided in two divisions, with the title game set for May 8. The league's regular season opens on May 15.

Rodman scored in the 60th minute after coming in off the bench. The only player younger than Rodman to score in the NWSL was Australian Ellie Carpenter, who had a goal for the Portland Thorns 22 days after her 18th birthday for against the Spirit.

Afterward, Spirit Coach Richie Burke was brimming with praise for his rookie.

“The kid is just brilliant. She’s a machine as an athlete, just unbelievable," Burke said. "When you play against her, you train with her, you see how quickly she closes you down. She’s deceptively quick to close you down. But now she’s getting tactically better, too."

Rodman has been vocal in the past about wanting to forge her own path in women's soccer, separate from her Hall of Fame father's legacy. Her brother DJ Rodman plays basketball for Washington State.

Players from the U.S. national team were not with their NWSL club teams because of a European trip during the FIFA competition window. The United States played to a 1-1 draw with Sweden earlier Saturday in Stockholm.